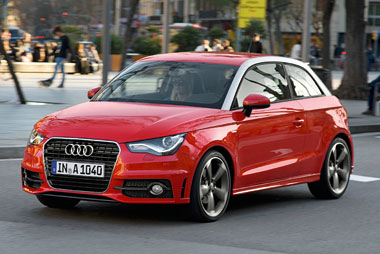 If the Audi A2 was rather too forward looking to be a huge success when it was launched in 2000 (not to mention expensive for Audi to build and for customers to buy), the new A1 perhaps captures the current mood more accurately.

While the aluminium A2 ticked all the right boxes when it came to fuel efficiency and brand image, the cost of its bespoke construction resulted in it being killed off just when people were really beginning to pay attention to low emissions and good fuel consumption.

The A1, on the other hand, shares some components with Volkswagen Group small products resulting in a more conventional small car than the A2.

But it is also primed to take advantage of recent fuel-saving technology as well as a growing appetite for downsizing, especially among drivers of premium cars.

And it couldn’t have escaped Audi’s attention that during the past 10 years its German rival BMW has been rather successful in reviving the Mini brand.

Audi claims the A1 contains everything it stands for distilled into a compact car.

Available to order now with UK deliveries starting in November, the A1 is currently available only as a three-door model with a choice of 86bhp 1.2 TFSI or 122bhp 1.4 TSI petrol engines and a 105bhp 1.6 TDI diesel.

There is a sub-100g/km version of the 1.6 TDI offered in other markets where diesel small cars are more popular, although its introduction in the UK is likely to depend on whether London’s congestion charge rules are changed to favour low-CO2 cars.

The 105bhp version has CO2 emissions of 105g/km and is expected to be the most popular engine in the range, accounting for about 40% of UK sales.

Both the 1.2 TFSI and 1.6 TDI come with five-speed manual gearboxes; the 1.4 TFSI has a six-speed manual with a seven-speed S Tronic dual-clutch gearbox as an option.

However, all versions apart from the S Line-equipped 1.4 TSI S Tronic fall below 120g/km of CO2 putting them in the lowest BIK tax bands for petrol and diesel. The S Tronic has CO2 emissions of 122g/km.

It’s worth pointing out that while all models benefit from fuel-saving start/stop technology, the S Tronic cars – effectively an automatic transmission – also do so.

The A1 feels as well finished as any other Audi, with top-quality materials and a solid feel inside.

The controls in the dashboard centre are slightly angled towards the driver and although there is a generally sober feel, items like the large round vents and colour coding options for the vent surrounds and the base of the centre console give the interior its
own character.

The A1 is nimble enough on the road – its electro-hydraulic steering offering a little more engagement and feel than fully electric set-ups – and whatever engine you choose, it should be comfortable on a motorway run.

The A1 should satisfy some of the appetite for compact premium cars among user-choosers, and gives drivers a true premium alternative to the Mini.

Stacks up very well on costs against rivals and should be desirable for many years to come.