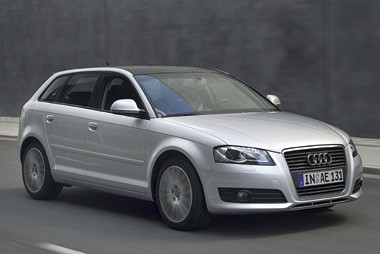 Revised A3 builds on Audi strengths.

You cannot fault the product strategy that has seen Audi rise to become the biggest-selling premium brand in the UK fleet market.

Revised A3 builds on Audi strengths.

You cannot fault the product strategy that has seen Audi rise to become the biggest-selling premium brand in the UK fleet market.

But the more successful it becomes, the more it seems to swim in ever-decreasing circles, unable or unwilling to break out of a cycle of product development that requires it to refine the same mixture over and over again.

At what point does the next version of the tasty Audi brew become indiscernible to the last one for the average customer?

The latest A4 certainly requires a sensitive palate to differentiate it from the last model.

It’s just different enough, but the margins are getting very fine.

I was thinking this while driving the next generation 2009 A3, which has had some styling modifications and new engines.

There’s no doubt that it’s a lovely car and improves in some key areas over the previous version, but if I had just done three or four 20,000-mile years in the last one, and had just picked up the keys to my shiny new one, I wouldn’t be too far down the road before a sense of ennui would sweep over me that I was seatbelted to an old friend with a new haircut.

Perhaps it’s a mid-life crisis on my part.

The A3 has been a massively popular offering in the corporate sector and continues to sell in strong numbers.

Some have criticised the lack of space in both the three-door and the Sportback, but that doesn’t seem to have been much of a deterrent to the kind of younger buyers Audi has targeted with the car.

Its biggest failing has been the engines, which left it trailing miles behind BMW in terms of all the key parameters of the corporate sector: refinement, performance and efficiency.

Fortunately, this lop-sided comparison has been squared slightly with the fitment of the new 2.0-litre TDI engine already serving with distinction in the Golf.

So, instead of the pumpy, bi-polar, leash straining roar of the old unit, now the A3 has the insistent, smooth and sophisticated dash of common rail.

It is now mightily impressive.

With 140bhp it’s got decent performance without being spectacular but it feels as though you could live very happily with it for thousands of miles.

Although still not as good as its 1 Series nemesis, it’s a very useful improvement.

Other changes seem to have centred around the front of the car, where it complies to what seems to be Audi’s design edict that each replacement car should look marginally more angry than the previous one.

It now has redesigned lights with some integrated slivers of metal, but the overall effect is fairly minimal.

There are some changes to the interior too, with some new buttons, but the A3 still majors heavily on dependability shot through with lashings of quality.

They are two strengths that have served it very well since the car was first launched, and to be honest they still deliver a fine car.

The question is, will company car drivers one day start to
tire of such predictability and crave something a little more
vivacious?

The Civic comes with satellite navigation, climate control and rear parking sensors as standard, while the Golf comes with leather seats.

The BMW and Audi are hardly imbued with a litany of luxurious goodies. All, though, have power around the 140bhp mark.

The 1 Series is far ahead thanks to its EfficientDynamics technologies.

Even with the new A3 being lower in CO2, its banding sees the BMW around £200 a year cheaper for a 22% taxpayer.

The Volkswagen and Honda are higher still, yet aren’t exactly inefficient.

The Honda is the most expensive in terms of service, maintenance and repair.

There was talk that the Civic has been blighted by various niggly faults, although Honda claims these are now fixed.

Even so, its 12,500-mile servicing intervals do not help costs, while the others benefit from variable servicing.

The Golf would cost a staggering £1,300 more than the BMW over the same period.

CAP estimates some cars are seeing up to a year’s value lost in three or four months. Set against that backdrop, the new Audi performs well.

The Honda doesn’t perform strongly enough in any one category to drag itself closer to the others.

The rest all have a strong showing in at least one area: the BMW in fuel and SMR, and the Audi and Volkswagen in depreciation. But as a whole, the Audi looks a long way ahead.

First to go is the Civic. Despite having a lot of kit as standard which would keep the driver happy, for a fleet manager, the fact that it costs more than £2,500 to run over 60,000 miles than the Audi is a major minus.

For the other three, the issue is less clear cut. Choosing the BMW would be a big win on one hand for the driver with its low tax, but comes with little equipment.

The Golf is more expensive to run but is better equipped ( and a new model is imminent), while Audi is similarly parsimonious with the A3’s spec sheet.

It is, however, a class act, with a few but marked improvements, and is the cheapest to run by £900, which makes it our choice.