AUDI’S ambition to be the UK’s best-selling premium car brand will move up a gear this autumn when five-door versions of the Audi A3 go on sale.

Designed to swell the German company’s presence in the premium sector, the range has been aimed at extending the lead it has held since the A3 launched the segment for upmarket three-door cars eight years ago.

But the introduction also forms part of a concerted effort by Audi UK to wrest domination of the UK business car market from BMW over the next few years. 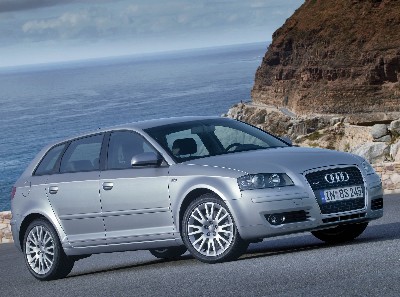 ‘It may take us a while, but I’m convinced that we will achieve our goal of overtaking BMW in the race to be the biggest premium car brand,’ said Audi UK director Kevin Rose.

Speaking as the 18-strong Sportback range was making its international media debut in the south of France, Rose singled out the Bavarian brand as his company’s principal rival for fleet registrations.

He said: ‘We intend to give them a run for their money with this car, but our recent performance levels show we’re doing it already.

‘So far this year, our sales are running slightly ahead of Mercedes-Benz and only 2,000 behind BMW, so I’m very pleased with the progress we’re making.’

Rose described the Sportback as the start-point of his plan to expand Audi UK. He said: ‘The 8,000 extra sales it should generate next year will take total A3 volume to 18,000 units or more – it has the potential to grow the total to more than 20,000.

‘At present, the A4 is our best-selling range, with annual volume of 27,000 units. As part of our efforts to maintain good residual values, I’d prefer to manage that volume at the current level and achieve growth by adding other models in new areas of the market.

‘We’ll soon have a coupe version of the A4 and a new SUV and I expect each will add to our overall volume. The premium market will account for 14% of total sales this year and should rise to 18% or even 20% in four years. Our share of the market should stay at 21%, so we have lots of potential – my plan is for Audi to reach well in excess of 100,000 units by 2008.’

Due to be launched in September with full availability from November, the Sportback has an extended bodyshell to boost rear passenger space and cargo capacity. Introduced to compete with the BMW 1-series, it is claimed to blend practicality with sporty driving.

Included in the line-up is Audi’s new 2.0-litre FSI turbo engine, a product of racetrack technology and the first production unit to marry petrol direct injection with turbocharging.

Available with either four-wheel drive or DSG, the direct shift automatic transmission, the motor delivers a 145mph top speed and accelerates to 62mph in seven seconds but still returns more than 36mpg.

Claiming best power, torque, economy and emission levels, the car is being pitched to undercut its rival and only the entry-level 1.6 version is dearer than the equivalent 1-series.

Rose said: ‘These cars are highly tax-efficient and are unique in the market. We’ve shown the range to the leasing companies and had a positive response. We were pleased when they described it as bridging the gap between the premium A and B segments and a vehicle that was different.

‘But we were delighted when they said it would reduce their dependence on the 3-series.

‘That’s a significant factor in our objective to beat BMW, which is a great brand and deserves respect. However, even though we’re close to BMW in terms of image, I want us to win higher customer loyalty.

‘And instead of showroom incentives, we will use attractive new products as another foundation for growth.’

One-third of the £4.5 million launch budget for the range is being devoted to the business sector, which is expected to account for 35% of sales, and a 200-strong demonstration fleet is being made available.

SPOT a new A3 Sportback in your rear-view mirror and the car’s striking appearance is bound to prompt a second glance.

Flanked by clear glass headlights, the single-frame radiator grille gives this model a distinctive front end and a style that should go down well with the executive driver.

The rest of the car doesn’t disappoint either – as long as you accept that it’s been created to be closer to sporty progress than practical motoring of the workhorse kind.

To be fair, loadspace does extend from 370 litres to 1,120 litres, but folding the rear seat backrest forward doesn’t provide the flat floor preferred by many business drivers.

No qualms from behind the wheel, though. With 200bhp to go at, the new 2.0T FSI provides all the thrills of the current S3 but with less effort and at significantly less operating cost.

Compared with the previous A3 five-door model, the Sportback is 65mm longer and 30mm wider to give better head and legroom for rear seat occupants.

But some rapid driving over mountain passes soon showed the stretch has had no effect on either agility or roadholding, both impressive in the quattro version.

Not as rapid but still remarkably nimble is the 2.0 TDI. Fitted with DSG, the clever double-clutch automatic transmission, this is a best-of-all-worlds compromise for high-mileage diesel aficionados, allowing seamless shifts through six ratios, ease of driving and super economy. What a shame the £1,400 price makes it an expensive option.

With an arching roof line and a sloping rear end, the Sportback is more coupe than wagon and the good news is that it feels like it on the move. Audi’s designers have made a great job of turning the A3 into two cars with different personalities, but both having huge premium sector appeal.