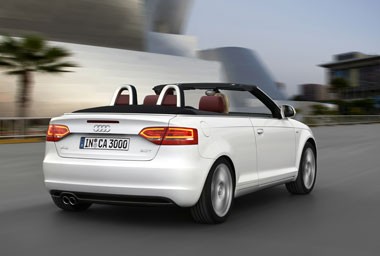 Ten years ago, those “in the know” said Audi was making a mistake in launching the A3. They claimed it would dilute the brand and said there was no need for a premium marque in this sector.

Fast forward to today and Audi is revealing the third bodystyle in the range – the Convertible. Since its launch in 1996, Audi has sold 1.9 million A3 hatches and Sportbacks worldwide, and last year alone shifted 231,000 units.

So I think we can safely say that “those in the know” actually know bugger all.

The A3 range reflects Audi’s growth as a brand – it has multiplied into a key premium marque vying for supremacy with BMW for the hearts and minds of user-choosers.

And the latter will be a key target of the new Convertible, on sale in the spring with prices starting at £20,740.

It takes a three-door A3, chops off the roof and replaces it with a fabric version (no folding metal roofs from Audi, mainly due to weight issues).

This leaves what Audi claims is a four-seat soft-top, but in reality is a two-seater plus two occasional seats for short people in the back.

There are also two ungainly rollover hoops for the rear seat passengers, which look awful and spoil what is an otherwise attractive looking car.

Inside, it’s much as you’d expect from Audi, all neat and logical and solid, while outside are some new LED light units which will find their way on to the hatchback A3s later in the year.

The fabric roof is fully electric on Sport models and comes with extra lining for increased soundproofing, while base spec means a touch more noise and requires drivers to unlatch the roof themselves.

An S line trim level will be added later this year.

The 105bhp 1.9 TDI wasn’t available to drive at launch, but the 2.0 TDI was, the latest common rail version of the engine.

This feels and sounds more refined than before and offers plenty of overtaking power from low down in the rev range.

The 2.0 TFSI with 200bhp is the sportiest option, but it was the 1.8 TFSI that impressed the most, being keen to rev and offering sprightly performance.

The ride and handling have suffered in the conversion from hatch to soft-top and the A3 transmits road bumps throughout the bodyshell.

With the roof up, the A3 looks elegant and with the Acoustic roof there is little wind or road noise intruding into the cabin.

In fact, you could be in a hatch version were it not for the terrible rear view thanks to those unsightly rollover hoops.

Doubtless the Convertible will continue the A3 success story, but it is probably the weakest link of the three models offered. It looks ungainly with the roof down and the ride and handling have suffered. The 1.8 TFSI is the one to go for, though, if you want a soft-top A3.