PICTURE the scene: you’re driving along on a sunny day with the roof down, soaking up the sunshine and looking good as you cruise along.

Then, suddenly, it starts to rain. Slowing to about 20mph down a quiet road, you push a button by the handbrake and a roof unfurls itself from its home in the boot, locks itself into position and raises all the windows, securing you in a warm, dry cabin.

This is motoring at its all-weather best, and Audi’s revised A4 Cabriolet range can rightly claim to be a car for all seasons.

As with the previous range, it offers a stylish four-seater convertible, but now it’s even better.

There’s a new look for a start, with revised lights front and rear and the adoption of the deeper Audi corporate grille which descends below the bumper line to give it a more aggressive look.

There is also a revised chassis and steering system for better driver involvement – an answer to criticisms of the old version, and a new interior.

Audi has also been busy working on the roof, and the A4 now comes with the option of an ‘acoustic hood’ which has extra insulation to cut down noise intrusion into the cabin. All models at the launch were equipped with this, and it made the A4 as quiet and refined as a tin-top car.

On the Continent it is a e250 option, but specification levels for the UK have yet to be announced, and it may be fitted as standard here.

The revised A4 Cabriolet is available to order now, but cars won’t reach our shores until February next year. Audi expects to sell around 6,000 models a year, which is slightly down on the old version’s peak of 8,000 – although this is more due to the market shrinking rather than anything to do with the car itself.

Of those 6,000 sales, the lion’s share (40%) will be of the new 2.0 TDI, which offers user-choosers the lowest benefit-in-kind tax bills in the sector and a relatively affordable price tag. The next biggest seller will be the 1.8T, which uses a 163bhp engine carried over from the previous model.

AS well as a new look, Audi has been busy making changes to the A4 Cabriolet’s chassis.

The suspension set-up has altered, with settings taken from the larger A6 model, and there’s a modified steering rack which claims to add more feel into the wheel. And it certainly does. Gone is the numb steering feel of the old car, replaced by a Servotronic system which has far more weight engineered in.

There are also four new engines: a 2.0-litre turbocharged FSI unit as found in the Volkswagen Golf GTI and a 3.2-litre V6 FSI. There are also two new diesels: a 2.0 TDI and a 3.0 TDI with quattro four-wheel drive.

The 2.0 TDI will be of most interest to company car drivers, but none were available to drive at launch, so instead we drove the 2.0 TFSI and the 3.0 TDI. The 2.0-litre petrol offers 138bhp but feels strangled. It needs to revved really hard to extract any performance, and it sounds quite rough at the same time.

The complete opposite applies to the 3.0 TDI. This engine is a gem, endowed with an embarrassment of torque. Pressing the accelerator in any gear results in a smooth punch in the back, while the V6 diesel makes a pleasant sound. It’s the only noise that makes it into the cabin, as wind and tyre noise are well suppressed. Even at idle the diesel engine is well muted. 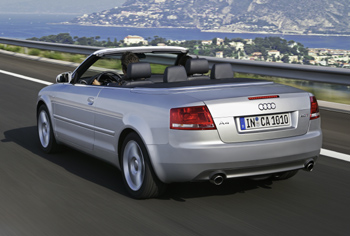 IN 3.0 TDI form, the A4 is every car you could want all rolled into one: smooth, refined, quick, economical and fun to drive, with the option of roof-down driving when the sun shines.