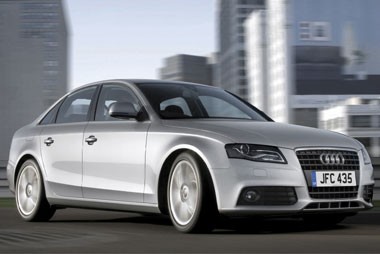 The A4 is one of a bastion of vehicles synonymous with fleets and the company car.

It has been a firm favourite since its launch in 1994, and now the new generation has arrived.

The new A4 is a recognisable evolution of the outgoing model and, let’s face it, most of the A4s before that.

Audi has always erred on the cautious side when it comes to restyling its cars, but that’s not to say that the new look is a dull one.

It’s subtle but stylish, with some well-placed lines and neat little touches.

The headlights have a slightly mean-looking frown, accentuated by the optional LED running lights (£1,100 with the Xenon Plus headlight kit), while the rising creases running from front to rear break up the flanks and give the car a sleeker appearance.

This is a good thing, as the new A4 is wider and longer than its predecessor, although it is lower.

The interior is a benchmark in quality.

The seats could use a bit more lateral and lumbar support, but everything feels robust and well made, from the switchgear to the type of plastics used.

This is mirrored in the driving experience.

Audis aren’t usually exhilarating behind the wheel, but not much can beat them for an indomitable feeling of safety and solidity.

The new 2.0-litre TDI engine packs 143bhp and 236lb-ft of torque, which makes for smooth and decisive acceleration and the A4 reaches 62mph from rest in 9.4 seconds.

The engine is mated to a six-speed gearbox, which is one of the car’s highlights.

All recent Audis that we’ve tried have been a treat to change gear in and the new A4 continues to set benchmarks for the opposition.

Not too light, not too clunky; it’s just right and makes us wonder why some rival manufacturers are so far behind in this area.

Fuel consumption is also impressive, with an official combined figure of 51.3mpg.

The A4 is not a small car, but during our time with it we averaged a whisker under 50mpg on the motorway and never dipped below 42mpg, even when crawling through London traffic.

Carbon dioxide is emitted at a rate of 144g/km, which puts it in the 19% benefit-in-kind tax band.

As standard, you get 17-inch alloys, Audi’s Concert audio system, complete with a 6.5-inch colour screen and 10 speakers, as well as automatic headlights, rear view mirror and wipers.

Drivers seeking thrills from their wheels need not apply, but those who value quality of build and a relaxed driving experience should take a look at the new A4.

Four cars which are very evenly matched on price, but the Volvo leads the way with 163bhp, compared to 143bhp for the Audi and BMW and 136bhp for the C-Class. All are well equipped, with the Audi offering climate control and rear parking sensors as standard.

BMW’s EfficientDynamics technology puts the 318d a long way ahead, costing a 40% taxpayer £141 a month in benefit-in-kind tax. The Audi comes in second, costing the same taxpayer £150 a month. The Mercedes-Benz will cost £159 and the Volvo £185 a month.

With variable service intervals, the BMW and Mercedes-Benz eke out a small advantage. The Volvo is on a par with them with its fixed 18,000-mile service intervals. The Audi is most expensive, costing one pence per mile more than the BMW, thanks to needing attention at some point between 9,000 and 19,000 miles.

Once again EfficientDynamics helps the BMW top the chart. Its fuel-saving technology returns a claimed 60.1mpg average economy to give a fuel spend of under £5,000 over 60,000 miles. The Audi returns 51.4mpg, the C200 CDI 49.6mpg and the Volvo a lowish 42.8mpg.

As the newest kid on the block, the Audi has the strongest residual value predictions, with a CAP estimate of 47% after three years/ 60,000 miles. The next newest car, the C-Class, will retain 44% and the BMW 41%. The ageing Volvo is outclassed here, retaining just 31%.

The BMW wins with an advantage of almost one pence per mile over the A4. At just under 34ppm, the 318d will cost £20,400 to run over a typical fleet life. The Audi will cost £21,000. The C-Class is closer to the class leader than it used to be, but the Volvo is outclassed again.

We’ll discount the Volvo first – it’s an ageing model which simply doesn’t have the badge cachet to compete directly with the established German premium trio.

Of these three, it’s very hard to separate them in emotional terms.

The Mercedes-Benz is a handsome car, the Audi is impeccably built and very stylish, while the 318d is the choice of drivers thanks to its handling and engine.

But rationally it is easier to pick a winner, and it is the BMW which retains its crown in this test thanks to its superior on-paper running cost performance.