AUDI’S brand is all about subtlety and elegance. Which is why the arrival of the ‘in-your-face’ Q7 is something of a shock to the system.

Its buyers are people who want everyone to know they’ve made it and have got a fair few quid, which is all well and good, but not very Audi.

Step forward the A6 Allroad, a car which offers much of what the Q7 does but without its size and conspicuousness.

Using the quattro A6 Avant as a base, Audi transforms it into an Allroad by adding some body cladding, fitting adaptive air suspension and bolting on some sump guards front and rear.

There’s also a bespoke front grille, but aside from that the rest is pure A6 Avant. For 99% of the time the Allroad will do everything that the Q7 does but without the guilt of driving such a hulking piece of metal. It’s only when the off-road going gets really tough that the Q7’s extra ground clearance sets it apart.

Audi expects the Allroad to have more of an appeal to corporate buyers than the Q7, thanks mainly to the former’s closer association with the A6. Sales volumes will be relatively small, with 700 units expected to find homes this year, and 40% of these will be to corporate buyers.

From July it will be available with 2.7 and 3.0-litre diesel engines, while next year will see the arrival of the 3.2-litre V6 and 4.2-litre V8 petrols, swelling volumes to 855. The 2.7 TDI Tiptronic is likely to be the biggest seller.

Allroad models cost roughly £2,000 more than the regular A6 Avant, mainly due to the fitment of air suspension.

SETTLE in behind the wheel of the Allroad and it is instantly familiar as an A6. There’s the same imposing dashboard and centre console which angles itself towards the driver, and that all-imposing feel of quality.

It’s only when you look down that you notice a difference – the Allroad comes fitted with hard-wearing carpets as standard, presumably to cope with all the mud and grime that lifestyle owners will bring back into the car.

On the move, things remain very closely associated with the A6. The ride is on the hard side in all suspension modes, be it Automatic, Comfort or the more extreme Dynamic setting, but this does give the car a planted feel on the road.

The steering retains that over-light feel but this doesn’t detract from the overall driving experience. Show the Allroad a twisting road and it relishes the challenge. There’s a huge amount of grip on offer, especially with the suspension set to its lowest level, and the automatic gearboxes fitted to our test cars shot the Audi out of turns with alacrity.

The petrol models don’t reach the UK until 2007, but even then they come second to the diesels in terms of driveability and common sense due to their higher fuel economy.

Of the two TDIs, the 2.7-litre version will be the big seller, and rightly so. It blends decent fuel economy and emissions with strong performance, especially in the mid-range. It’s only when you drive it back-to-back with the 3.0 TDI that you appreciate the extra power you’re missing.

THE Allroad is a worthy addition to the A6 family. It has all the plus points of the standard A6 but with extra road presence and increased off-road ability. 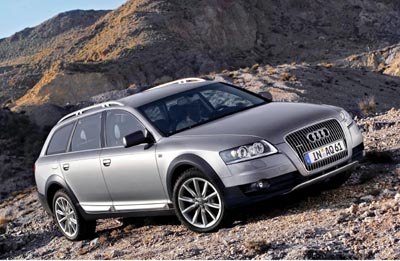