NOW I’m sure people who hail from Manchester are a lovely welcoming bunch, but the thought of spending a wet, windy, wintry evening with them, 200 miles from home, courtesy of my stranded Audi didn’t exactly fill me with glee.

I had just returned from a car launch in sunny Spain to Manchester Airport and as I battled my way across the car park in the driving rain I was looking forward to sitting in my nice warm car with the heated seats on and the climate control cranked up.

But when I reached the A6, the key fob wouldn’t unlock it or raise the usually handy electrically-powered boot. It was dead.

I did manage to open the driver’s door the old fashioned way to get out of the Mancunian weather (being a southern softy I’m not used to all this rain), but nothing electrical would work.

Instantly a problem that had occurred the day before roared back into focus. I had left a hotel for the short drive to the airport and the MMI screen had packed up – no radio, sat-nav or telephone, and I had rung my local Peterborough Audi dealer to book it in on my return.

Back in the car park, I rang the Audi breakdown support line to tell them my woes.

The nice lady informed me they would call someone out and so I waited in my cold car watching even more rain lash down, preparing for a long, dark, lonely wait.

However, only 45 minutes later, who should appear like a vision in orange by my side but a splendid RAC man called Steve. With such a hallowed name, I knew I was in safe hands.

Embarrassingly, it turned out to be nothing more complicated than a flat battery and he got the car up and running in five minutes.

This linked in with the MMI fault. Apparently when battery charge is low, the screen shuts down to save power and it would seem I hadn’t gone far enough to recharge it the morning before.

But how had the battery run so low? I am at a total loss: the lights are automatic, the boot shuts itself automatically and the MMI screen is linked to the ignition so I hadn’t left it on accidentally. The doors were shut and the internal lights were not switched on. 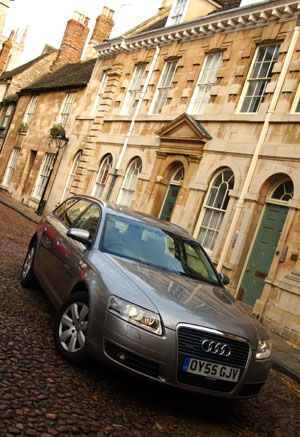 I’ve seen alarms set off by jets before, but the car was parked a long way from the runway at the hotel, so it couldn’t have been that. One of the more outlandish suggestions I have since heard was that some cars that are fairly laden with technology like the A6 can be affected by the high density of radar waves in the vicinity of airports, draining the battery or regularly setting off the alarm. Sounds a little fantastical to me, but I would be grateful for any other suggestions to this conundrum.

On my return from the North, I got the car checked over at the dealer, and they reported nothing was amiss, and it’s not had a problem since.

And even though the A6 was only at Peterborough Audi for an hour, it was given a complete valet inside and out, which was a cheery end to my tale.