I remember the halcyon days when my mum used to make cricket teas.

Chicken tikka sandwiches, flapjacks, homemade sponge, strawberries and cream – it was worth having my bowling smashed time and time again into the nearby woods just for the mid-game feast.

But now that I live far from my childhood home I don’t have the luxury of regular motherly meals and last weekend I was saddled with the chore of making the teas for my team. I found it amazing how much garishly-coloured food you can buy in Morrison’s for £30.

After a morning feverishly buttering enough bread for 24 blokes, I had to transport my assorted ham salad, cheese and pickle and egg and cress concoctions (mother would be proud) to the ground in the back of the Audi, along with my very large cricket bag – a sandwich-squashing behemoth if ever there was one.

But the handy storage system in the boot came to the rescue of my Morrison’s-bought cakes (sorry mother). It’s a simple but very sturdy system.

There is an inch-thick removable floor in the boot that has three hinges with a handle at the end.

This means you can lift the floor and pivot it upwards. There are a series of ridges underneath that the edge of the floor then sits in, meaning you can compartmentalise the boot into two, thus keeping smelly cricket kit and scrumptious teas separate. It’s a simple system but that is its beauty.

I also had to transport a very old carpet to the dump the other week. It was so old that the rubbery underside was starting to crumble and it got everywhere, horrible little flakes of the stuff that clung to the interior of the car. But because the load floor lifts out I could vacuum it like the living room carpet and it was soon as good as new.

This feature comes as standard with SE-spec, while load fixing rails are a further £125, although I’m not sure if they’re needed, such is the floor’s effectiveness.

Aside from practicality, the A6 has also been impressing in the refinement area. It’s done more than 9,000 miles now and it just gets quieter and stronger. There’s no point at which it sounds like a diesel any more. The only thing is, it could do with more power.

The car leaps off the line thanks to some prodigious torque and halfway around the rev counter it is still pulling hard. With only 176bhp from 2.7 litres (the 2.0-litre BMW diesel delivers 163bhp – considerably more bhp per litre) it doesn’t exactly run out of puff, but there’s a noticeable slowdown in higher revs before the next gearchange. 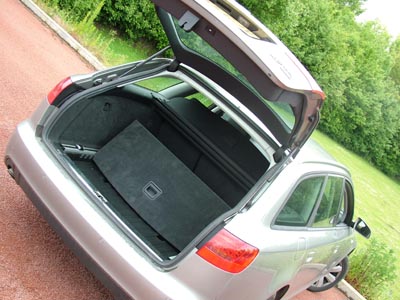