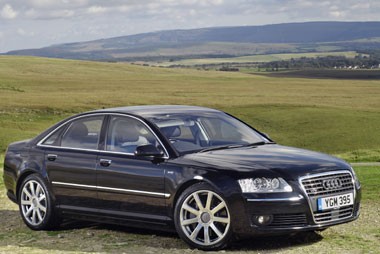 It may have escaped your attention, but Audi’s flagship A8 saloon range has been updated for the 2008 model year.

Squint and you may notice that the foglights under the front bumper are now trapezoidal rather than circular, and inside you’ll notice that the mobile telephone system is now Bluetooth enabled.

You can also tune into DAB radio and toast your corporate bottom on heated seats.

All of which is well and good, and undoubtedly makes the A8 an even more attractive place in which to cover business miles.

But under the bonnet is where the big news is, with Audi using the model year update to usher in a new petrol engine which it is billing as the ‘UK’s cleanest luxury saloon’.

The 2.8-litre V6 engine in this new model emits 199g/km of CO2 and returns a claimed 34.0mpg on the combined cycle, which is pretty impressive for a car of this stature.

Obviously, the A8’s use of lightweight aluminium in the body and chassis helps cut weight down to a less bloaty 1.7 tonnes, but the use of FSI direct injection technology also helps.

And dropping the A8’s trademark quattro four-wheel drive system for power coming through the front wheels only helps drop a few more pounds.

Power is delivered via a seven-speed Multitronic gearbox – a continuously variable unit which is inherently more efficient than a traditional automatic with stepped ratios.

Multitronic is constantly monitoring the engine and throttle inputs to ensure the engine remains in its peak operating range, delivering better performance and increased fuel economy.

That’s great, but the constant dancing around the gearbox can lead to some unseemly engine noise.

Sometimes you just want to lope along on the engine’s torque, but Multitronic will always spring into action to ensure that there’s instant acceleration, even when you don’t really want it.

The 2.8-litre FSI unit delivers 210bhp, which enables it to reach 147mph and accelerate from 0-62mph in eight seconds.

That sounds acceptable, but the greater torque found in its diesel sibling means the TDI would leave the FSI for dead.

The latter unit needs plenty of winding up to make decent progress, whereas a prod on the throttle in the diesel delivers a surge of acceleration.

These criticisms are obviously entirely personal, and others may think that making rapid progress in such a car is a little unseemly.

Where the A8 does score is in the usual Audi strongholds – build quality and styling.

No-one puts a car together like Audi, in my eyes, and the A8 looks and feels very special inside, from the soft leather to the wood veneer and elegant satellite-navigation screen which swivels out from behind its walnut mask.

And the A8’s styling retains that retrained subtlety that has been lost by the new generation with their LED running lights.

As previously mentioned, there’s now even more equipment included as standard, and the 2.8 FSI also scores on price, undercutting the 3.0 TDI by £1,000.

It makes for a convincing, and very tempting, package.

The two Audis look good value, with both A8s around the £50,000 mark. As is the norm, the diesel is more expensive, with a £1,000 premium over the petrol version.

The Mercedes-Benz costs much more – the previous £54,000 S280 model being discontinued from the range.

Audi markets the FSI A8 as the UK’s cleanest luxury saloon, and its sub-200g/km CO2 emissions are easily the lowest here.

Just under £1,000 separates first from last in terms of service, maintenance and repair costs over three years and 60,000 miles.

All four cars comes with variable service intervals, with attention dictated by the on-board computer. Labour rates will be the biggest differentiating factor here.

With its direct injection engine and lightweight aluminium construction, the petrol A8 will cost the least in fuel terms. It returns 34.0mpg for a likely spend of £8,300 over 60,000 miles. The diesel Audi returns 33.6mpg – its heavier four-wheel drive running gear denting economy.

Luxury saloons traditionally depreciate like a brick, and this quartet back this up. The newest model, the A8 FSI, will retain just 30% of its cost new after three years/60,000 miles, according to CAP. The diesel A8 retains 34%, the S-Class 39% and the BMW 28%.

The diesel Audi secures a near-3ppm advantage over its petrol stablemate – and it is mostly down to the TDI’s better RV forecast.

It costs £1,000 more at the front-end than the FSI but will be worth £2,300 more at disposal time. The BMW’s low RV puts it well out of contention.

The BMW is the first to be discounted – it is an ageing model now and it cannot compete on running cost terms here.

The Mercedes-Benz runs the petrol-engined Audi close in wholelife costs but its much higher front-end price means an extra £240 a month in benefit-in-kind tax.

Which leaves the two Audis.

The A8 is a class act, blending high equipment levels and sleek styling. So which is better – petrol or diesel?

In running cost terms the diesel is nearly 3ppm cheaper than the petrol, but the tables are turned with the FSI costing £140 a month less in company car tax.

This secures it the victory.