THE new Audi S6 is beautifully built, has many hundreds of horsepower, sounds wonderful and has links to evocative names like Lamborghini and Le Mans.

How then does it feel a little less than the sum of its parts? What is that nagging feeling about it, despite it being one of the most acceptable ways to monster a German autobahn?

In the end, it comes down to what it doesn’t have, rather than what it does. A feeling of dreams unfulfilled. But it’s also a great car. So what’s up?

For a start, you get a phenomenal engine: a 429bhp 5.2-litre V10 which is a new iteration of the 5.0-litre unit found in the Lamborghini Gallardo. Audi has added parts of its own, including FSI direct injection using technology mastered in its Le Mans-winning R8 racers. This is a very good start.

But there is a caveat: to fit in with Volkswagen Group politics and the marketing strategy for the A6 range, it is detuned from the Gallardo’s high output of 520bhp. 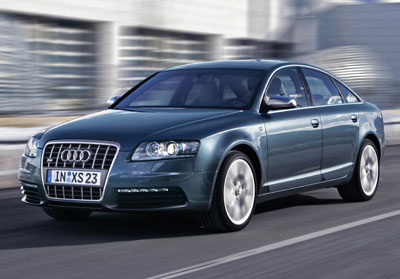 Producing that sort of power would mean it had more than the BMW M5 which, in a rough calculation of the way these things work, would mean it would have to cost more money than its Munich rival.

And then, where would ‘the-car-that-must-not be-named’ be pitched? For at the launch of the S6, cheekily putting an ‘R’ in front of its name would make Audi executives visibly flinch and change the subject.

The RS6 is the Kylie to the S6’s Danni – a car that if the glorious RS4 is anything to go by, could be a snorting machine that could knock the M5 into second place and make the S6 look second rate. But that’s for another day.

Like the M5 and E55, the S6 is not a car that is in the face of other drivers. The differences between it and a well-specced S-line A6 are very subtle but, for the aficionado, unequivocal: a tiny V10 badge by the front wheel arch, brushed aluminium door mirrors and metallic inserts in the grille are the most obvious.

The wheels are especially funky, looking like they have been sculpted out of a number of outsize tuning forks, and you would really have to be an S brand anorak to spot the 14mm more flared arches.

The interior is yet again proof that Audi is the master of building quality cabins. The carbon fibre inserts are very cool, the thick leather seats are extremely grippy and comfy and the aluminum trim on the gear lever and steering wheel are stylishly done.

There is one – and dare I say it about an Audi – brash element: daytime running lights. Not your Volvo-esque sidelights but two eye-burningly bright strips of white LEDs which serve two purposes. They denote that this is a V10 (being as there are 10 of them) as well as making absolutely clear to traffic in front that they should move over immediately.

This may not be the only S6 Audi produces though. With the firm now running its multi-million pound Le Mans racing program on diesel, there seems no reason that we should not see an S6 diesel in the future. 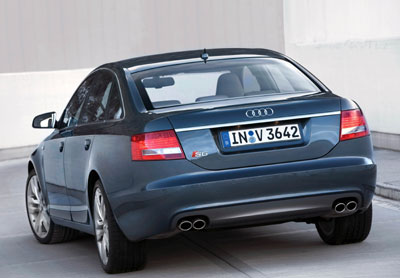 After all, there is already a 5.0-litre V10 TDI in the Volkswagen Group stable used in the Touareg and Phaeton. Practicalities of fitting it in an A6 and tuning it up aside, it seems a logical step.

GIVE a car four-wheel drive and wide, low profile tyres and you will never suffer from a lack of grip and traction. In fact the S6 has so much that only foolhardiness or worryingly low skill levels will see a driver get themselves in trouble through a corner.

What this massive sticking power means is that the S6 can make very rapid progress, but will not necessarily be massive fun. But then who buys a super saloon to go sliding and larking about?

This is a car for getting from one place to the next very rapidly, but also with the minimum of fuss: 62mph from standstill is dispatched in 5.2 seconds (a paltry 0.1 seconds slower for the Avant), with top speed limited to 155mph. The excellent Tiptronic gearbox is fast and smooth, to the point that there really is little need to ever use the aluminium gear paddles on the S6’s steering wheel. 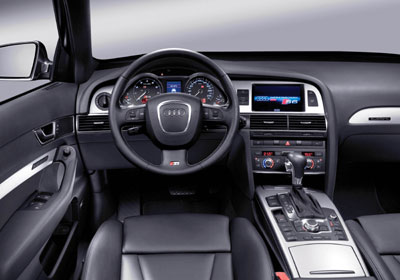 The S6 certainly sounds fantastic – its V10 engine does not have the same high-pitched, high-revving whine as the BMW M5 but instead has a deep, blatting throb. The suspension feels a little firm, but then the car rides on 19-inch wheels, which are never the most cosseting, and the suspension is firmer than even the hard Sport setting available on a standard A6.

And for a car weighing nearly two tonnes it has a suitably beefy braking system. The combination of four-wheel drive and massive 18-inch brakes means that the S6 is as composed at stopping as it is at going.

THE S6 is so well-packaged. It looks handsome yet sexy, sounds fantastic, goes like stink and could also be called good value for money, if your view of the world is suitably, fortunately, skewed. But it does feel something of a support act before the real show begins when the curtain eventually goes up on the RS6.