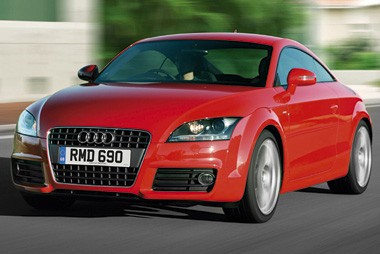 I’m lucky enough to be the custodian of Fleet News’ long-term test Audi TT. It’s a car I love thanks to its looks, performance, build quality and equipment.

In fact, I’d be hard pressed to think of any areas on which it could be improved.

And then I spent a week in the new diesel-engined TT and found quite a few reasons why it is significantly better than ‘my’ 2.0-litre turbo petrol TT.

While purists may gasp at a diesel TT being the pick of the range, I’m afraid cold, hard economics make it so.

The 170bhp TDI engine returns claimed average fuel economy of more than 53mpg, and emits 139g/km of CO2, which puts it into the 18% benefit-in-kind tax band for drivers.

And with a real-world range of nearly 500 miles, it becomes far more user-friendly than my TT, which slurps through a tank in less than 300 miles.

All well and good, I hear you say, but surely the TT is a sportscar? It is, and it remains one even with a diesel engine fitted under the sleek bonnet.

Audi has carried out some considerable engineering work on the TT TDI to maintain its driving dynamics, and it has succeeded.

The 170bhp engine provides plenty of performance, yet unlike other diesels is happy to rev right round to the red line.

Combined with a slick six-speed manual gearbox, it makes for an entertaining drive.

Thankfully, it doesn’t sound like a normal diesel engine either, with well-suppressed noise on start-up and a throaty growl
engineered into the cabin when accelerating.

And with Quattro four-wheel drive fitted as standard, the TT’s cornering limits are very high and it never struggles to channel its power down to the road (unlike my front-wheel drive model).

The interior is a delight, with the TT’s cabin ranking among
the best in the car world – it’s well built and designed, uses
high quality materials and offers the snugness that coupé drivers look for.

The excellent front seats are heavily bolstered to keep you in place, the gearbox falls to hand in the perfect spot and the flat-bottomed steering wheel brings a smidgen of motorsport cred to the TT.

There are even a pair of rear seats, although these are all but useless for anyone over toddler age.

But fold them down flat and you have a large boot on offer, easily able to accommodate two sets of golf clubs and with space left for a couple of soft bags.

Downsides are few and far between in the TT.

Reversing out of a space can be difficult thanks to the sloping roofline and thick C-pillars, while the standard 17-inch wheels make the TT look under-wheeled.

Pop on some larger wheels from the options list (and the short-shift gearbox which makes a real difference to the action) and you have a fantastic package.

For a user-chooser wanting style but with a tax bill that’s not through the roof, there’s little to touch the TT TDI.

Not so good on:

A strange mix of cars – the Volvo is a coupé-cabriolet, but in entry-level trim with a 136bhp engine, while the CLC is a top-spec model but with only 150bhp.

The Audi and BMW lead the way, costing a 40% taxpayer £158 and £157 a month in benefit-in-kind tax respectively thanks to their very low emissions.

The CLC is cheaper at the front-end but its higher emissions result in a £196 monthly bill. The Volvo will cost £200 a month.

The Mercedes-Benz and BMW are closely matched thanks to variable servicing intervals, while the Volvo needs attention every 12,500 miles.

However, the TT is well adrift here with its four-wheel drive system harder on tyres and the use of aluminium in the chassis resulting in more expensive repair bills.

The Audi is close behind, returning 53.3mpg despite its Quattro drivetrain. The CLC returns 47.9mpg and the C70 46.3mpg.

CAP estimates that the CLC will retain 48% of its cost new after three years/60,000 miles and, combined with its low front-end price, it is easily ahead here.

With the lowest SMR and depreciation costs, the Mercedes-Benz secures a convincing running costs victory, costing just under £23,000 over three years/60,000 miles.

The TT undercuts its closest rival, the BMW, by around £300.

The Volvo is well adrift here.

It is slightly unfair to include the Volvo in this comparison as it is not a coupé like the rest – instead, it offers a folding metal roof to transform into a convertible.

It is a stylish and well equipped package, but is not an out-and-out sports coupé.

Neither is the Mercedes-Benz, which is too staid to take on the TT and 123d. So this comes down to a choice between the Audi and BMW.

There is nothing to choose between them in terms of driver taxation levels, so victory goes to the TT.

It is stylish, well-equipped and costs less to run than the BMW.

The fact that it returns more than 53mpg and emits 139g/km of CO2 is an added bonus.