It seems almost perverse that a near-£26,000 small saloon car has become synonymous with the company car market.

While models from the volume brands still dominate the fleet market, the BMW 3 Series has continued its assault on user-choosers and makes regular appearances in the top 10 chart of best-selling fleet models.

And it seems this trend is set to continue because there is now an improved version of the biggest seller in the 3 Series line-up – the 320d.

In September a revised model was launched, boosting power from 163 to 177bhp.

All very nice, but the real changes will make much more of a difference to the balance sheets of fleet managers and the pockets of company car drivers.

Despite gaining a useful power upgrade, the 320d is now even more fuel efficient than before and also emits much less CO2.

By adopting the Efficient-Dynamics technology pioneered on the smaller 1 Series, the 320d is now streets ahead of its rivals.

Brake energy regeneration, automatic stop-start, a gearshift indicator, new electric power steering system and active aerodynamics (flaps behind the grille which open and close depending on engine load to smooth the airflow) contribute to some startling figures – combined fuel economy of 58.9mpg and CO2 emissions of 128g/km.

Remember, this is a sports saloon delivering nearly 180bhp!

This puts the 320d in the lowest possible benefit-in-kind tax band for a diesel vehicle. 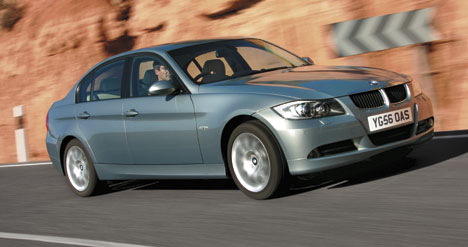 But all of these gains have not been made at the expense of driver appeal – a key selling point for the 3 Series.

With rear-wheel drive and near-50/50 weight distribution, the 320d remains a great car to drive.

The whole package feels so balanced that driving is not a chore, especially when you’re away from the main roads and enjoying cross-country trips.

There’s a nicely weighted steering rack which offers very direct inputs. It remains flat and composed during cornering and the ride quality, although on the firm side, is not uncomfortable.

After all, this is a sports saloon.

The extra power on offer from the turbocharged 2.0-litre diesel engine is apparent, with a surge of overtaking power on tap from very low down the rev range.

Once up to motorway speed, the 320d cruises with little noise intrusion into the cabin.

The engine is mated to a six-speed manual gearbox which has a short throw and a very positive feel to the shift.

With the benefits of a recent company-wide improvement in the quality of fixtures and materials, room for a family of four and the ever-increasing appeal of the BMW badge, the 320d as a package is incredibly hard to fault.

It could be a little roomier in the back for adult passengers, and SE-spec versions don’t have the visual clout of the M Sport models thanks to their bodykit and bigger wheels, but the 320d overcomes these with a performance on the balance sheet which is little short of staggering. 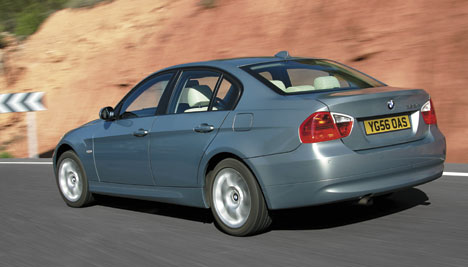