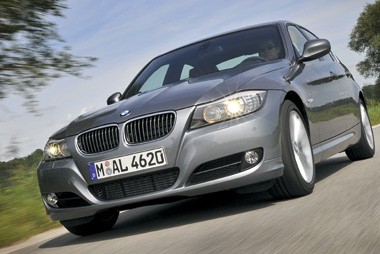 Shiny new ‘58’ plate aside, your colleagues in the office car park may not notice that you’re driving the brand new BMW 3 Series.

As is the Bavarian company’s way, it has given its bread-and-butter model the mildest of mid-life updates, though there will be few complaints from buyers.

On the outside, new fan-shaped rear lights are the most obvious change, though they are complemented by restyled front lamps and a more aggressively finished nose thanks to a new bumper and bonnet.

Compare the new model with the old and you may also notice the re-sculpted body sides and rear bumper. Or not.

The success of the changes to the interior of the 3 Series is largely dependent on specification.

All models benefit from enhanced equipment levels and minor tweaks to the switchgear, instruments and materials used. New colours are available too.

However, it’s buyers of BMW’s iDrive infotainment system that gain the most tangible improvement, as the facelifted 3 Series is the first car to feature an all-new version of the oft-maligned interface.

Along with snazzier graphics and a faster reacting menu, the new system features more shortcut buttons for regularly used functions and more ways to access features than before.

Unfortunately for those upgrading from the old system to the new, you’ll have to relearn how to use it all.

Though the four-cylinder 318d and 320d models will remain the strongest sellers (and the addition of an automatic option on the 318d will be welcomed), it’s the high-performance six-cylinder turbodiesels that have been updated, with the result that both the 325d and 330d fall into band D for VED, yet compare favourably in terms of economy and performance with models from Audi and Mercedes-Benz that occupy bands E and F.

Along with improved acceleration throughout the rev range the 330d boasts improved combined cycle fuel economy of 49.6mpg, while CO2 output is now just 152g/km (or 164g/km with an automatic gearbox).

This car almost obviates the need for the twin-turbo 335d model.

The experience behind the wheel is enhanced over the old 3 Series thanks to subtle changes to the switchgear. A chrome-rimmed starter button kicks the engine into life, while you grip a multi-function wheel even in the entry-level model.

Both 335i and the 330d models were available to drive, though the former’s engine is unchanged. Not that there’s much reason to fix what isn’t broken, the 3.0-litre twin-turbo petrol engine being an absolute gem.

You’d be hard pushed to detect the presence of turbocharging either, so linear is the substantial shove on tap and sonorous the note emanating from the twin exhausts.

Though 31mpg and 218g/km of CO2 are respectable figures given the performance available, the 335i won’t ever be a big seller.

Not that buyers of the 330d will feel short-changed. Though the 335i packs a mighty 302bhp (in comparison to the 330d’s 241bhp), it falls some way short in terms of torque, with the 330d’s new unit belting out a significant 89lb-ft more.

In a straight line the result is that the diesel model is only 0.5 seconds slower to 62mph from a standstill, with identical (limited) top speeds of 155mph.

In real-world usage the 330d is every bit as rapid as the 335i and it makes a surprisingly pleasing noise too.

Yet, despite all that, it returns an incredible 49.6mpg and slots into band D for vehicle excise duty. And that fuel economy figure is actually achievable, as it doesn’t necessitate using the entire rev range to make decent progress – though the powerplant is perfectly capable if the mood takes you.

If you enjoy the occasional twisty road to break up the motorway slog, you’ll find the 3 Series a willing companion. Both Mercedes-Benz and Audi have gained on BMW in this respect, but the keen driver will favour the beautifully balanced BMW chassis.

This feeling of control, stability and even agility permeates the whole
3 Series range, with the more powerful models making the drive even more rewarding.

Our only criticism is a shortage of feedback, while the gearchange is a little ‘springy’ in the gate.

BMW’s recipe for its most important model is a mix of premium market quality and mass-market appeal.

Fuel-saving tweaks make the 3 Series a choice to be made with the head and a calculator, yet it is also the most enjoyable car in its class to drive.