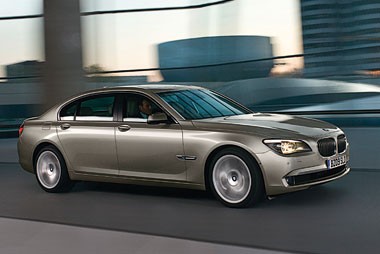 General company heirarchy demands that the chairman has a bigger and better car than anyone else at his or her company.

But not even the boardroom can be immune to lavish excess these days, so if the boss must have a luxury saloon, the choice comes down to two cars – the BMW 7 Series and the Mercedes-Benz S-Class.

Both come with state-of-the-art diesel engines, and with BMW’s announcement of a long wheelbase model, both offer plenty of room in the back for the working executive.

The 7 Series has won many fans since its launch last year, and it is the current holder of the Fleet News best luxury car title.

In long wheelbase form it offers an extra 14cm of rear legroom plus self-levelling rear suspension.

Under the bonnet is a silky smooth 245bhp 3.0-litre turbodiesel engine which uses some of BMW’s famed EfficientDynamics technology to give quite surprising economy figures for such a large car.

BMW claims 40.9mpg on the combined cycle, while CO2 emissions stand at 180g/km.

A few years ago those figures would have been acceptable on an upper-medium model, nevermind a two-tonne limousine with a top speed in excess of 150mph.

Just as impressive as the frugaility is the smoothness of the model – in long wheelbase guise this car floats along in serene quiet and comfort.

For those who will drive their 7 Series, the interior is traditional BMW with a cockpit slanted into the driver and a much improved iDrive system.

For those who will be chauffeured, it is an incredibly luxurious place to be.

While running costs and tax bills may still be huge, they are, nonetheless, better than its nemesis, the Mercedes-Benz S-Class.