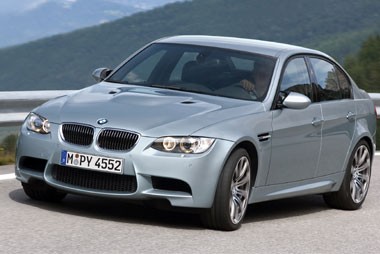 Thirteen, usually considered unlucky, is going to be the reverse for 400 drivers this year because after 13 years BMW is again making a four-door saloon version of its fastest 3 Series model, the 155mph M3.

M3s are usually two-door coupés – the last saloon sold only 700 during the car’s lifespan – but BMW thinks times are changing.

And from some angles, the new saloon looks even better than the coupé and further increases its practicality by boasting the biggest boot ever for a 3 Series.

Shoulder and elbow room in the rear is also increased over the coupé.

Despite the strong family resemblance, nearly 80% of the parts of an M3 are different to a 3 Series saloon.

A six-speed manual gearbox is standard, but a double clutch seven-speed paddle change semi-automatic comes in July for an extra £2,590.

The system speeds up gear changes, cutting the 0-62mph time by 0.2 seconds to 4.7 seconds, and improves fuel consumption on the combined cycle from 22.8mpg to 23.7mpg.

This is mirrored by a 10g/km reduction in CO2 emissions to 285g/km.

Dark graphite 18-inch alloy wheels are standard fit but most buyers are expected to specify polished 19-inch ones for an extra £1,265.

Adjustable electronic damper control suspension (an extra £1,295) lets you go for stiffer settings if you find a smooth enough section of road and want to drive in a more dynamic style.

Ninety per cent of typical buyers are male, aged between 30 and 50 years old and either highly-paid professionals or the owner/partner of a business.

Revving to 8,400rpm, the M3’s V8 engine dominates proceedings. It’s the highest-revving BMW motor this side of Nick Heidfeld’s Formula One car and for real performance you need to work it.

The V8 is 22% more powerful than the six-cylinder in the previous model, but despite a claimed 8% improvement in fuel economy, we averaged only 15.2mpg on the press launch route (in Spain).

A colleague on a different road, constrained by traffic, recorded 24mpg.

The new M3 is a more mature, less boisterous companion than its illustrious predecessor and closer in character to the new, and wonderfully sonorous, Lexus IS F.

Even with the power button pressed there isn’t the old razor response to the accelerator and with the steering set to sport it’s not as informative.

It isn’t that the M3 has gone soft, more that it’s tipped further towards fast luxury than the motorsport end of the spectrum.

It feels more aloof than the previous model and the fuel consumption can be poor, which hits the wallet and reduces travelling range.