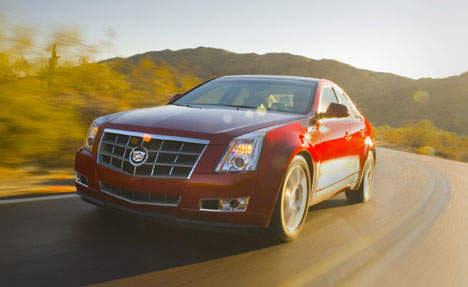 You have to hand it to the Americans – if something doesn’t work, they certainly don’t just give up. They keep coming back.

General Motors’ top luxury brand Cadillac has had a chequered history in the UK even though new models have improved things greatly in recent years – so much so that in some markets in Europe, the Middle East and Russia Cadillac now outsells Lexus.

However, in the UK it doesn’t even come close.

But midway through next year, Caddy will have another go here with its all-new CTS sports saloon and having spent a couple of days driving on road and track, this time I think it has a more than decent chance.

The CTS’s aggressive styling makes Audis and BMWs look like shrinking violets and while it can deliver whisper quiet luxury, it has balanced rear-wheel drive handling that keen drivers demand.

Add an amazing sound system with a 40-gigabyte hard drive and a super plush interior that beats a BMW 5 Series or Mercedes-Benz E-Class – the CTS’s rivals – in size and its appeal is clear.

Unlike the unloved and rather odd-looking but relaxing to drive Cadillac BLS, a rebadged Saab, the CTS is a pure Cadillac and looks, feels and drives like a premium product.

The razor-edged vertical styling is unmistakeably Cadillac but sharper than before and it even looks striking at night thanks to distinctive white and red light ‘pipes’ front and rear.

BLS sales of around 200 last year under importer Kroymans disappointed and the Cadillac operation in the UK has been downsized from nine to six dealers “to reflect where sales volumes currently are,” according to Jonathan Nash, who is now in charge of the Cadillac, Corvette and Hummer operation in the UK while continuing as managing director of Saab.

The company describes 400 to 500 sales per year for the CTS as realistic, and also helping to protect residual values.

At least half are expected to be bought by user-choosers and run as company cars.

In the States, the car is available in two trim levels, Elegance and Sport Luxury, with a choice of two engines – a 210bhp 2.8-litre V6 and 3.6-litre V6 with normal or direct fuel-injection and 263bhp or 311bhp.

Sport Luxury models in the US can be ordered with four-wheel drive but the under-bonnet layout does not permit that for right-hand drive markets.

Buyers in the US can choose from three suspension settings but specifications and prices for UK models are still being discussed.

As guidance the current CTS, which impinged on some people’s radar because of its mis-treatment in the sci-fi thriller The Matrix Reloaded, costs from £25,000 to £30,000.

Mr Nash promises the car will offer “fantastic power-for-money value,” and adds: “We know we need to steal some customers from German brands and need to offer an alternative.”

Cadillac has gone to amazing lengths to make the new CTS quiet and refined, and with a full bonnet seal and triple seals round the doors, noise levels are muted unless you are in the mood for speed.

The car has been partly developed on the legendary Nürburgring race track – and it shows.

A couple of these very early direct injection 3.6-litre cars I tried felt lacking in engine bite but the third car was a barnstormer and had sharper responses from the six-speed automatic transmission.

The gearlever action of the six-speed manual was rather vague, though light in operation.

With the exception of an area of silver colour trim on the centre console, the CTS shows no sign of the bean counter bureaucracy you usually see and sense with some of GM’s American products.

It’s as if Cadillac has suddenly woken up and realised its competition isn’t Ford’s Lincoln brand but European premium car makers – and that’s good news for those that want choice and exclusivity.

The first generation CTS, launched in 2003, took Cadillac back to rear-wheel drive with an optional manual gearbox for the first time in 15 years.

So, if you consider it has taken BMW over 30 years to get where its cars are today, then the progress made by Cadillac against an accountant-dominant culture in the last five is amazing. 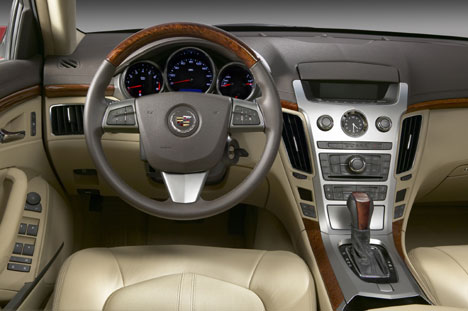 The Corkscrew corner on the Laguna Seca racetrack in California is one of the most intimidating in the world, with a blind approach and dropping the height of a four-storey building by the time you (hopefully) slam out at the bottom.

Nigel Mansell in his CART racing days reckoned you changed direction three times in 1.4 seconds, so to risk a new Cadillac at Laguna shows the company’s confidence in its CTS sports saloon.

While the car is almost eerily quiet, it can now turn on the noise and fun big time if the driver is in the mood.

You can choose from three suspension settings and though I thought the stiffest one, dubbed ‘race ready’ with Michelin Pilot Sport 2 tyres, the package to have, only the milder handling oriented set-up was available at the track.

As on the road, I didn’t like the dead section each side of straight ahead on the steering, but once on lock it’s pretty good.

The brakes were strong and with 50:50 front to rear weight distribution the handling is forgiving.

If you have part turned off the ESP system you can edge the car into corners using the brakes without fear of it spinning, but go the whole hog and off really means off.

This could be the breakthrough car for Cadillac in Britain – it feels high-class European rather than American, drives well with the tauter suspension and has styling that grows on you. A restricted dealer network and concern over residual values are the obstacles in its way.


Figures in brackets for auto versions

The BLS’s Saab roots are evident in the cabin, which means a neat, well-built fascia and plenty of room inside.