So this is the point at which we can finally take Chevrolet seriously. Up until now, its models have largely been apologetically-rebadged Daewoos, which weren’t very good.

But much is promised of Chevrolet as a modern, global value brand in its own right, rather than just making do with the GM cast-offs. The Captiva is its first step: an American brand, built in Korea, sold over here.

For starters, it looks pretty good, and if anything is more handsome that its cousin, the Vauxhall Antara.

It has an ‘on demand’ four-wheel drive system rather than a thirsty permanent set-up, and the option of seven seats, which points to Chevrolet’s thinking of who will buy it: families, not serious off-roaders.

There’s a 2.4-litre petrol model but most buyers will look first towards the 2.0-litre diesel version, with 150bhp, allied to a five-speed manual gearbox.

In the LT trim level of our test model, the Captiva is also pretty well-specified with 17-inch alloy wheels, ESP, Descent Control and MP3 capability.

CAP’s residual value prediction for one after three years/60,000 miles is a decently healthy £7,775/39% as well, so all’s well in Chevrolet’s brave new world then. If only.

When you climb in, the interior certainly is at the budget end of the spectrum. All the buttons are perfectly good quality, but they are surrounded by some shiny plastic.

It’s acceptable, but don’t expect to be wowed.

Also, the air-conditioning in our model changed its mind on the nation’s atmosphere more quickly than Gordon Brown. Throwing out torrents of cold air one minute, warm blasts followed soon after and to keep the cabin at a temperature not requiring a coat, it had to be cranked up to 26 degrees.

Then the radio kept losing signal – often only briefly, but enough to become infuriating. 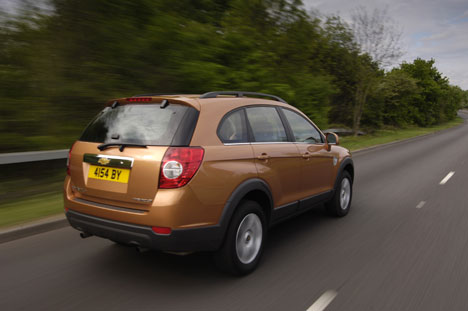 Fortunately, though, my mind would wander from these minor annoyances by the frankly cataclysmic rate at which this SUV drank fuel.

The combined figure is a respectable 37.1mpg. Not great, but not terrible.

But in real life, the Captiva doesn’t even get close to such heady heights. Driving up and down motorways saw the trip computer recording 15 litres per 100km, the equivalent of about 20mpg.

That’s petrol Range Rover territory – and so poor we asked Chevrolet to check whether there was a fault on the car. There wasn’t.

These readouts are notoriously unreliable though, but the empty 65-litre fuel tank after barely more than 250 miles told its own story.

A major part of the problem is that at 70mph, in fifth gear, the diesel engine is revving its heart out at 3,000rpm. It desperately needs a sixth gear to give the motor a rest.

The engine isn’t one you would find in any Vauxhall other than the Antara and has been developed by GM Powertrain in Korea.

Perhaps they should have let the people who did the fine 1.9 CDTi we’re used to in Vauxhall products over here have a look at it.

The super-short gearing means it isn’t quiet either, although it is decently quick. Not that you would especially want to charge about because the Captiva feels old school SUV, teetering through corners with plenty of body roll and little steering feel.

But can its shortcoming be mitigated by its budget price? I’m not so sure.

The Santa Fe drives more nicely and for £20,000, if you need space and practicality you can get some very fine, capacious upper-medium estates that will be much cheaper to run.