MANUFACTURERS have to strike a delicate balance between bold styling that wins over drivers and creating a short-lived fashion statement, which briefly shines and then spends its production life at the bottom of the sales charts.

There are some successes that prove a risk can be worth taking – and one is the Chrysler PT Cruiser.

Although on face value its appeal might seem limited to fans of American hot-rods, the car has enjoyed enduring appeal and has sold 875,000 units worldwide, with nearly a quarter of a million outside the US since its launch in 2000.

So when it came to updating such a successful car, Chrysler hasn’t drastically altered the exterior. But step inside and it is a completely different story. Buoyed by the success of the retro approach, Chrysler has completely changed the look.

The flexibility remains but little else does, thankfully, as the old version’s cabin An all-new, brighter dashboard includes a new central stack and a three-dial instrument panel with satin silver finish.Even the gearstick and steering wheel take on a retro feel.

Overall, there is a much wider power band than the outgoing engine, which is intended to offer a more relaxed driving experience, but with more flexibility when you feel like pushing on.

Drivers can also choose the carried-over 2.4-litre petrol engine, offering 143bhp and 165lb-ft of torque, with 0-62mph reached in 10.3 seconds and overall fuel economy of 30.1mpg.

The new PT Cruiser will arrive next month, while a new petrol-only Cabrio version is planned in right-hand drive for launch in March next year. Prices for the soft-top should be lower than current left-hand drive versions, which start at £17,500 for the manual and £18,300 for the automatic.

Future developments for the range will include the launch of a new Route 66 model in the future.

THE new PT Cruiser manages to have an interior that is louder and quieter at the same time. Chrysler claims the quieter heating, lower engine noise from the diesel and greater use of sound absorbing materials have made it far less noisy inside.

It seems to have made a difference, which means you can pay more attention to what the interior styling is shouting at you. The key message is clearly retro, with dials, centre console, door handles and gearstick all playing their part in keeping up the atmosphere.

For my part, I would also have preferred ‘solidly built’ to be in the chorus of messages from the car, but there were a few disappointments, not least the flimsy covering for the top of the dashboard.

As for the new diesel engine, its more flexible power delivery makes a difference as it revs more like a petrol engine, with the added benefit of real low-down grunt.

Its eagerness to rev does mean that first gear feels short, though, as it red-lines very quickly, meaning second is often the cog of choice on the rather clunky gearbox.

There is the added benefit that the improved performance comes despite improved fuel efficiency and a lower CO2 figure. This make a choice of diesel for company car drivers the more likely option, particularly as it should achieve about 12mpg more than petrol models. 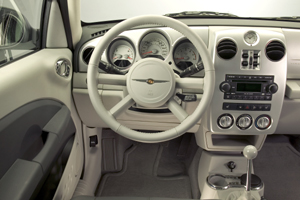 The refreshed exterior and totally overhauled interior will keep buyers interested, while the diesel engine provides a strong running costs case to carve out a niche on fleet choice lists.