"The C5 Aircross will be the first Citroën model to be offered with a plug-in hybrid powertrain in 2019." 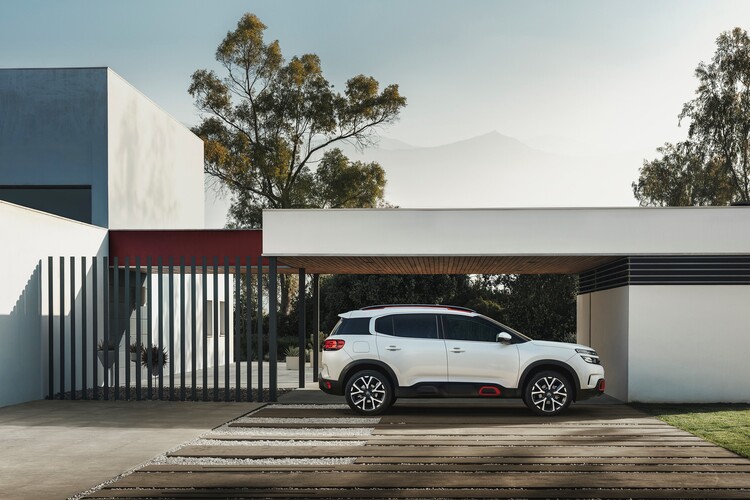 Citroën has unveiled a new member of its growing SUV family, with the European version of the C5 Aircross.

A rival for the Nissan Qashqai and Kia Sportage, the C5 Aircross is similar to a car that went on sale in China last year, and the brand’s new flagship for Europe is the second model in the line-up to come with Citroën Advanced Comfort programme.

Launching late in 2018 with petrol and diesel engines, the C5 Aircross will be the first Citroën model to be offered with a plug-in hybrid powertrain in 2019.

The C5 Aircross is clearly an SUV in design. It comes with a choice of 17-inch, 18-inch or 19-inch wheels, depending on specification, and its ground clearance of 230mm is greater than most other cars in its class.

Customers can choose from seven main body colours, and add a contrasting roof.

A clean and simple interior design reflects the latest Citroën styling preference, with a minimalist approach to dashboard buttons, and many functions contained within a touch-screen display.

There is a digital instrument display, enhancing the upmarket feel of the car as well as many soft-touch materials around the cabin.

The C5 Aircross is available with a broad choice of materials, ranging from cloth to Nappa leather, while the upholstery of the Advanced Comfort seats places the emphasis on soft and warm materials.

There are five different interior themes to choose from. Standard has Silica Grey cloth seats with a light grey strip at the top, and a grey console and dashboard insert.

Wild Grey has Stone Grey cloth and black leather effect cloth seats with an orange strip on the top, and a grey console and dashboard insert.

Metropolitan Beige comes with grey grained leather and Graphite cloth seats with a dark grey strip on the top, and a beige grey console and dashboard insert.

Metropolitan Grey has graphite grained leather and Graphite cloth seats underscored by a dark grey strip on the top, and a grey console and dashboard insert.

There are three individual rear seats available that can slide, recline and fold independently, while luggage space ranges from 580 litres to 720 litres up to window height, depending on the position of the rear seats. It rises to 1,630 litres up to roof height with the rear seats folded.

Mechanically similar to the Peugeot 3008 and the DS 7 Crossback, the C5 Aircross will launch with a choice of 130PS 1.2-litre or 180PS 1.6 litre petrol engines, both turbocharged, the former with a six-speed manual and the latter with an eight-speed automatic.

The eight-speed automatic transmission makes its Citroën debut on the C5 Aircross, and offers 7% better fuel efficiency compared with the six-speed auto available on other models.

A plug-in hybrid version, due later in 2019, will offer up to 37 miles of range on battery alone, and will be the only C5 Aircross to offer four-wheel drive.

The C5 Aircross is offered with a suite of safety and driver assistance technologies, including autonomous emergency braking, lane-keeping assistance, blindspot alert, traffic sign recognition and others.

Adaptive cruise control and lane-keeping assistance form the basis of semi-autonomous features that help reduce fatigue on the motorway, and in heavy stop-start traffic.

The car is available with keyless entry and start, parking assistance, and 360º cameras on higher specification versions.

For those that need off-road ability, Grip Control (which enhances front-wheel drive traction through braking the individual wheel that is losing traction and sending torque to the one with more grip) with a hill descent control.

In standard mode, Grip Control works automatically. But drivers can also select between modes using a thumbwheel on the central console, choosing Sand, All-Road, Snow or ‘ESP off’. It’s available with optional mud and snow tyres on 18-inch wheels.

A mirror screen function, compatible with Android Auto, Apple CarPlay and MirrorLink, occupants can use smartphone apps on the dashboard screen.

Wireless smartphone charging can be used to induction charge a wide range of smartphones or devices compatible with the Qi standard with a charging mat built into a dedicated storage space in the central console.

ConnectedCAM is a camera system built in to the stem of the interior rearview mirror, independent of the car’s multimedia system and using full HD GPS technology.

The camera can be used to take a photo or video of the exterior environment in front of the vehicle. The content can then be downloaded via email or on the social networks.

It also continuously films the road in front of the windscreen and automatically saves video recordings in the event of an accident.