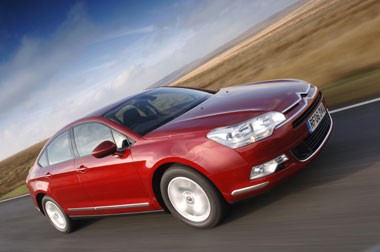 Ask what the typical driver of the previous Citroën C5 was like and most people would have met you with blank faces.

The car was so idiosyncratic in a market that favours quiet conservatism, apart from the odd flourish of a wheel arch or more prominent grille, that you started wondering about people who were theatre directors, worked in advertising, or at least wore bow ties.

One thing, as the low sales showed, was that C5s were not bought by fleets, unlike the Xantias of old.

But Citroën certainly plans to change all that with the new C5 saloon which goes on sale this month.

Looks are critical for success these days and the C5 is handsome and efficient, both inside and out, in a rather Germanic way that Citroën has been putting across in a cheeky advertising campaign.

The double chevron badge is built into the leading edge of the bonnet – without it, the car could be a Renault or a Volkswagen, while the rear is very Audi-like.

It even looks best in classy dark colours and has a huge boot beneath its unusual concave rear window.

The cabin is spacious as the car is slightly longer than the old C5, though lower.

An estate version is set to arrive in July.

We won’t know for sure about the boasted Teutonic quality as well as the appeal of the more solid looks until further down the line.

However, future value predictions from CAP after three years/60,000 miles for the 2.0-litre HDi VTR+ predict the car second only to the Volkswagen Passat in the upper-medium category.

It puts it ahead of cars like the Honda Accord, Mazda6, Peugeot 407, Ford Mondeo and Renault Laguna.

In numbers you are talking 36% retained value when the previous car was nearer the 25s.

Citroën’s marketing and fleet sales director Ian Hughes says he expect sales to be 70% fleet and 30% retail, with the 2.0-litre diesel VTR+ taking 40 to 50% of sales.

But he doesn’t want to talk total sales volumes.

“We have carefully chosen features that will carry value to the end of the life of the car and that is a fact that we will be putting over strongly to the leasing industry,” says Hughes.

A six-CD autochanger is an extra £200 and a lane departure warning system £300 – but only on VTR+ with the £1,550 leather pack that includes heated and, first in this class, massaging seats.

It’s the fixed centre hub steering wheel, sprinkled with switches, symbols and rotary controls that gives away the game you are in a Citroën.

Combined with enough buttons to rival a space shuttle and rather classy dials that display information in their centres, a few minutes with the handbook is a good idea in case you need to find the horn in a hurry.

The silver plastic section of the steering wheel brightens up the interior, and you don’t notice its feel when driving, but I wonder what it will look like when it’s been pawed for 60,000 miles.

The steering feels rather like driving a computer game, quick but without much feedback.

All were quiet and smooth riding at motorway speeds with supple rather than sporty rides which mean you shouldn’t end a high mileage day with backache.

Even the 1.6 feels quite peppy and, probably because of the engine being all alloy instead of a cast iron block, was the most agile in corners.

You can build up quite a lot of body roll in all cars unless you prod the sport button with the Hydractive suspension.

The rest of the time the Hydractive system cushions you from our increasing road imperfections.

The Citroën C5 is really worth considering. It’s much more
than just a great looking car.

It gives you that sense of feeling that it will go on delivering in the long term.

It’s a major step forward for Citroën and happily it still has that certain je ne sais quoi feeling about it. Merci beaucoup.