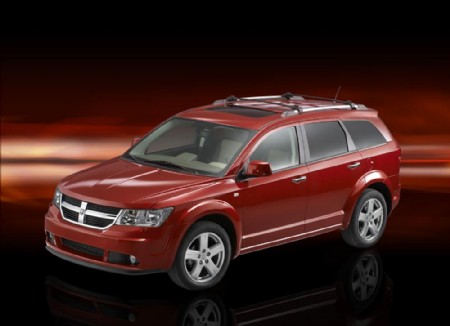 The spectrum of opinion ranges from epic American muscle and the romance of Route 66 to the outrageous excesses of gas-guzzling behemoths generally made to a poorer standard than Europeans have come to expect.

So the new seven-seater Dodge Journey faces an interesting test.

Many of the American-branded cars on sale over here have considerable European expertise attached to them – Ford’s product line-up is entirely European, Cadillac’s BLS is based on a Saab, and most of Chrysler’s offerings date back to its partnership with the German firm Daimler.

Bar the occasional Hummer, little that hits our shores is really of American origin.

But now that Chrysler and Daimler have split, the former company is once again all-American, and so is its Dodge brand.

The Journey is an MPV that’s instantly recognisable as a product from across the Atlantic.

Chrysler is pushing the American looks, but is keen to emphasise that it has the European credentials to appeal to this side of the Atlantic.

Diesel power is vital to the UK market, so on its trip across the Pond the Journey has picked up an engine from Volkswagen, which should tackle any gas-guzzling preconceptions and is expected to vastly outsell petrol variants.

This is a 2.0-litre turbodiesel with 138bhp and 229lb-ft of torque, which gives 43.5mpg on the combined cycle in manual transmission form.

For those that really want petrol power, a 2.4-litre unit produces 168bhp and 174lb-ft of torque and will achieve 32.1mpg.

The Journey aims to fit into a fairly recently established niche that combines the space and practicality of an MPV with an involving drive – a sector in which Ford’s S-MAX and Galaxy dominate.

Chrysler wants the Dodge to offer an alternative to these cars, and has priced the Journey very competitively.

Prices start at £16,995, which is around 10% cheaper than equivalent rivals, and the diesel model fits into the same company car tax band as the equivalent S-MAX with emissions of 170g/km of CO2 in the manual model.

In SXT form – expected to be the big seller – additions include front fog lamps, stain and odour-resistant cloth upholstery and a removable flashlight in the boot.

Chrysler expects two-thirds of all Dodge Journey sales to be to fleets, reflecting the results it has seen with its sister car the Chrysler Grand Voyager.

Before we got to drive the Journey, Dodge engineers gave us a quick introduction to the car.

They demonstrated the flexible seating system, which provides various configurations and folds the seats down with the touch of one button, and showed us the bountiful storage space in the floor, glovebox and armrest.

It all looked impressive.

Then we got to drive it, and the shine was somewhat smudged.

It’s a cliché to say that American cars are not as well made as European counterparts, but the Dodge really isn’t up to the standards we’ve come to expect.

The switchgear feels cheap and the plastics have little quality feel to them, although there is some soft touch material on the dash.

On motorways the Journey was comfortable – the seats are fine and the R/T model we tested had a decent entertainment system that allowed USB sticks and iPods to be plugged in.

But start pushing the car into the bends and it’s a very different tale.

The chassis is just not accomplished enough to allow any kind of driver confidence – the tail turns in a long time after the front and upsets the balance of the car.

Through hairpin bends it feels like a piggyback from a fat man on a unicycle.

That said, the flexible seating does work well.

There is plenty of room in the back for kids and adults, even in the third row, although with the rearmost seats up, don’t expect too much room for luggage.

The Volkswagen engine is fine, although it clatters quite loudly in the cabin compared to rivals like the S-MAX.

The Dodge Journey is certainly a step in the right direction for a niche American brand looking to establish a foothold in Europe.

It looks different from the rest of the crowd, has an established, reliable diesel engine and undercuts the opposition in price.

But it’s not as well made as its competitors, and isn’t as good to drive as rivals like the Ford S-MAX.

DODGE has taken something of a knocking in the motoring press (yours truly included) these past few weeks, most notably for its below-par Avenger upper-medium contender.