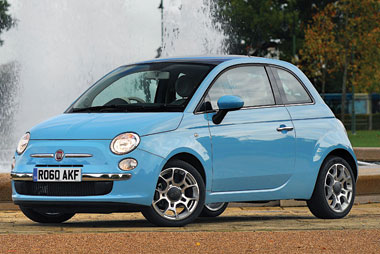 The 500 was a lifeline for Fiat soon after it had been staring into the abyss.

To some it was a blatant attempt to cash in on the success BMW had enjoyed with the Mini with a re-imagining of the original Fiat 500 of the 1950s.

But it struck a chord with car buyers and has been a huge success.

Called TwinAir, it uses the technology found in its MultiAir engines launched at the start of this year.

The two-cylinder format was chosen because of the benefits in reduced weight and lower fuel consumption.

Fiat says its compact nature will also make it simpler to add hybrid technology in future.

So the TwinAir is launched in the 500 first with an 875cc 85bhp turbocharged model, and with a set of performance and economy figures that look like they’re from a diesel engine.

It’s the first in a family of TwinAir engines, including a normally aspirated 67bhp version due in 2011, plus a 105bhp model to follow later using a more substantial turbo than the motor being launched now.

Performance also feels very diesel-like, with a strong surge of pulling power from below 2,000rpm, and the engine sounds a little like a diesel but with less vibration.

The TwinAir comes with stop-start technology – which starts more smoothly and rapidly than many other systems – while there is also an eco button which limits torque to 74lb-ft (100Nm) to help save more fuel.

The TwinAir offers a new way of achieving fuel efficiency that may be a more cost-effective alternative to diesel. We look forward to the next derivative.