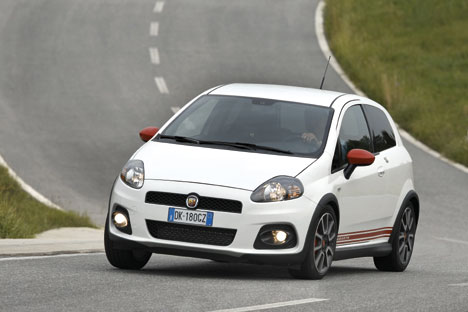 It’s a long time since Fiat has been in a position to claim class honours in the hot hatch sector.

The 130bhp Punto HGT, discontinued in 2006, struggled both on paper and on the road at a time when the class leaders were offering up to 180bhp.

All this will change next year, and Fiat is dusting off a famous and illustrious brand to lead its charge into enemy territory.

Abarth was last seen as a badge-engineered ‘warm’ version of the unpopular Stilo, and fans of the iconic marque with decades of racing and tuning heritage would be justified in feeling nervous.

But Fiat has bestowed Abarth status as a brand in its own right, alongside Alfa Romeo, Lancia and Maserati in its automotive stable.

The Grande Punto Abarth was launched in Italy in September, and the 155bhp hatchback should be on sale next summer through a small network of retail outlets in the UK.

More Abarth models – based on future small Fiats – will follow, including the 500.

Using a 1.4-litre T-jet petrol engine, the Grande Punto Abarth appears to punch above its weight compared with the competition.

It also comes with lowered suspension (by 10mm compared to the standard model), has 17-inch alloys, a racy interior and a sports boost button, increasing maximum torque from 152lb-ft at 5000rpm to 170lb-ft at 3000rpm.

If this isn’t enough, customers will be able to choose an upgrade pack called “esseesse” or “super sport”. This lowers the suspension by a further 20mm, adds 18-inch alloys, racing seats and boosts power to 180bhp and torque to 201lb-ft. There’s also the attention-grabbing livery.

We were only able to drive the Abarth for a couple of laps at a time around a wet circuit at one of Fiat’s testing facilities in Italy.

Although it has electric power steering, it’s one of the better systems and offers plenty of communication through the fingertips.

The slick-shifting six-speed gearbox is a delight to use and the brakes respond cleanly and progressively.

However, some may be disappointed to find that the electronic stability control can’t be disabled. Fiat claims it’s for safety reasons.

As well as its more driver-focused specification, the “esseesse” also has a tuned exhaust which has a throaty bark, and then spits and pops on the over-run.

It sounds great and Fiat insists it complies with all noise legislation.

The Grande Punto is already a good drive, and after undergoing the Abarth treatment turns into a great-looking and thoroughly entertaining hot-hatch, particularly with the extra modifications.