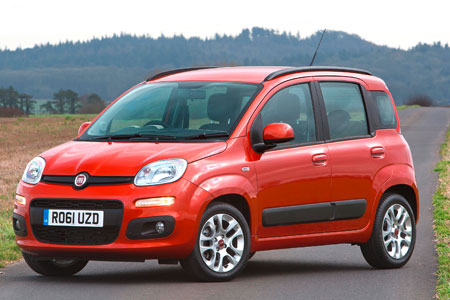 Executives at Fiat’s UK subsidiary were so pleased with the smarter, smoother profile that company designers created for the latest Panda that they coined a new word to describe it – squircle.

“We think that sums it up rather well because even though the rear of the car has a square shape, there’s a more rounded, circular theme at the front,” said senior product manager Rob Lake.

Unlikely as it is to be deemed a suitable addition to the English language, squircle fits a model that has been dominated by square bodywork since it first appeared 32 years ago. And, as ever, each millimetre of the space is put to good use in the latest car.

Noticeably less utilitarian in styling, the new Panda continues to major on functionality, rear passengers get more legroom and an optional sliding rear seat can raise load volume from 225 litres to 260 litres with the backrest in place.

With the backrest folded flat, cargo volume increases to 870 litres, and a forward-folding front passenger seat backrest (a £50 option) allows longer items to be carried.

Power comes from turbocharged and normally-aspirated Twinair and four-cylinder petrol engines plus a Multijet diesel motor. Initially, three trim levels provide a total of 13 versions but a four-wheel drive model, along with an enhanced traction front-drive car, will arrive in September.

Stop-start technology and a gear-change indicator is included on the Twinair and Multijet versions, but the mid-range, 1.2-litre petrol-powered Easy model will be the main contender for sales to public sector fleets.

Living up to its name for ease of driving, the Easy is refined, comfortable, quiet and relaxing transport with the latest variable-valve version of Fiat’s long-running Fire motor under its bonnet.