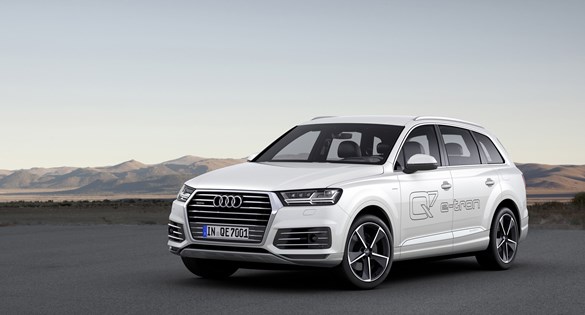 There’s something about SUVs and plug-in hybrid cars that creates an underlying harmony.

Generous dimensions mean the large and heavy hybrid components can be accommodated more easily without compromising passenger space, and the most dramatic reduction in CO2 emissions from adding electric components to an internal can be seen in these heavy vehicles.

We’ve witnessed a surge in plug-in vehicle sales in the UK based on the Mitsubishi Outlander PHEV finding the right balance of price, low tax liability and practicality, while company directors in luxury cars now have an increasing choice of high-end hybrid options.

Audi launched a version of the A3 Sportback in 2014 with a plug-in hybrid powertrain based on the 1.4-litre TFSI engine. Now it’s the turn of the new Q7 e-tron with Volkswagen Group’s first production diesel hybrid.

The Q7, launched earlier this year, squeezes in a battery and powerful electric motor along with a 258hp 3.0-litre V6 diesel engine to produce a rapid yet frugal (in the right circumstances), large SUV.

Available to order in December with UK deliveries beginning in March, the Q7 e-tron offers CO2 emissions of 46g/km, a total power output of 373hp and maximum torque of 516lb-ft. Unlike other versions of the Q7, the e-tron is only available with five seats because of how the powertrain components are packaged, and this really is where it falls down against the new Volvo XC90 T8, which manages to retain all seven seats and offer a spare wheel.

The Q7 offers a clear CO2 advantage over other large SUV plug-in hybrid rivals, such as the BMW X5 xDrive40e, Mercedes-Benz GLE 500e and Porsche Cayenne S E-Hybrid, none of which are able to crack 75g/km.

The Q7 can travel up to almost 35 miles on plug-in charge alone and, like other similar powertrains, can travel in EV mode at quite high speeds.

On our test route, the car was able to demonstrate its ‘predictive efficiency assistant’ technology. The e-tron will always prioritise EV mode but, with a route programmed into the sat-nav, it will also use that to optimise the powertrain for the conditions: engine on the motorway, EV in urban areas. As a result, the final third of the route was completed in EV mode as the car knew there was enough electric range to cover the remaining distance. Incidentally, we achieved 67.3mpg over the 40-plus miles.

There is also a feature that creates a pulsating resistance in the accelerator pedal when you’re not driving to optimum efficiency, to discourage wasting charge or fuel.

Otherwise, it’s very much like the other Q7s to drive: smooth, spacious and comfortable with exceptionally high quality interior fit and finish – and not too firm a ride. But if the driver needs use of more than five seats, they will have to look elsewhere.