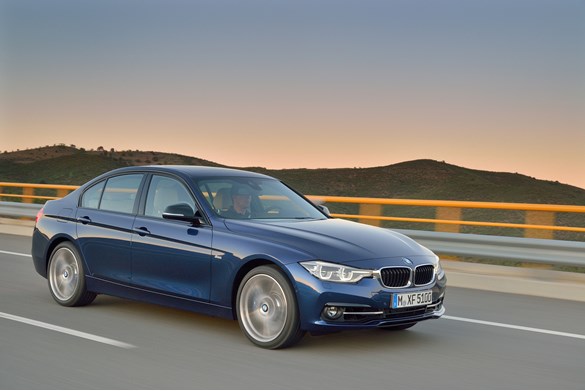 BMW makes no secret of its intentions with the revised 3 Series. Highlighted in the press information is that statement: “to defend and extend our segment leadership against existing competitors (Mercedes-Benz and Audi) and new entrants (Jaguar).

The 3 Series plays a vital role in BMW’s success. Year-to-date sales have fallen due to the run-out model, but the carmaker is confident that this position will be reversed in the second half of the year and into 2016, when it expects to sell around 29,000 models (21,000 saloon, 8,000 Touring). Just over half (53-54%) will be registered by fleets.

This mid-life refresh of the sixth generation 3 Series, which launched in 2012, is subtle – so subtle are the exterior changes that it makes spot the difference virtually redundant. (For the record, head and tail lights have been touched up and the side air intakes are slightly broader).

Inside, the quality of the materials has been improved with high gloss surfaces and chrome highlights which accentuate the premium look and feel.

However, it’s under the skin where the significant changes have been made: new engines, retuned suspension and new manual and auto transmissions deliver increased efficiency, greater power and better performance.

It is the only automatic in the segment to achieve this (BMW has invested substantial time and money in developing unique mapping for its auto gearboxes); Jaguar’s 99g/km XE is manual only (its auto is 106g/km).

This translates to official fuel efficiency of 74.3mpg. And that’s on a 163hp car capable of accelerating from 0-62mph in 7.8secs.

Despite those impressive figures, BMW expects the 104g/km 320 ED Sport (also 163hp) to account for the majority of fleet purchases. Additional equipment, including 17-inch alloy wheels, sport leather steering wheel, sport seats and high-gloss interior trim adds £500 to the P11d price, but boosts the residual value by £600, according to the pricing guides.

Sat-nav is now standard across the range which, when mated to the eight-speed automatic transmission, means BMW can offer all buyers proactive driving assistant. This uses navigation data and route profile to predict the right gear for the road ahead, improving efficiency and performance.

BMW also claims greater differentiation between ‘comfort’ and ‘sport’ mode than ever before, although this was difficult too ascertain on the limited driving available.

Tinkering to the chassis has resulted in new damper settings and thicker roll bars which claim to reduce body roll but not comfort, while a new steering set-up improves performance and feel. Both get a big tick – handling is precise and direct (though possibly still outdone by the XE), while the car remains composed and flat under enthusiastic cornering.

BMW product manager Mark Costello believes widening the trim range to slot in the ED Sport will have benefits further down the line.

“It diversifies our range which will be good for residual values when we see a variety of model trims coming back to market,” Costello told Fleet News.

BMW head of fleet Mark Bristow added: “The more variety there is , the better the RV performance will be.”

Later this year, BMW will launch a plug-in hybrid version, the 330e, which will reduce CO2 emissions to below 50g/km (estimated 134.5mpg) making it eligible for the £5,000 plug-in grant and no congestion charge.

Annual volumes will be in the low thousands, but demand from fleets is expected to be strong for a 252hp car in the 5% BIK bracket and with zero VED.

This refreshed sixth generation model is still reassuringly a 3 Series but with obvious improvements and enhancements that will appeal to fleets and company car drivers alike. It is set to reclaim its place at the head of the sector.