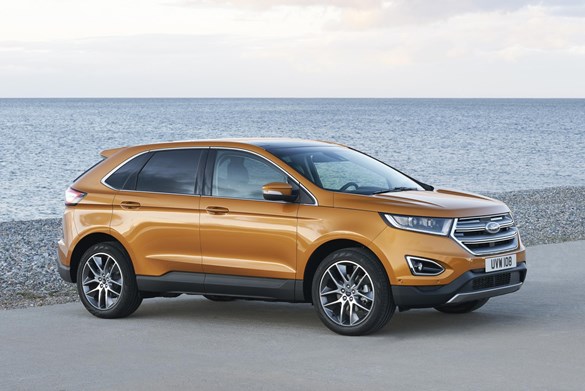 A new flagship model should soon allow Ford to take a tilt at front-runners in the booming high-end SUV sector.

“We’ve driven our car back-to-back with the heavyweight premium competitors and really believe it will punch above its weight in the sector –  we are convinced we have a real contender,” he said.

“The higher end of the SUV arena is becoming very competitive in the core fleet business and Ford needs to move into the part of the market where premium brands are playing a significant role with user-choosers. Competition is also keen in the SME sector, which has expanded greatly in the past five years.

“As well as being fully competitive in performance, features and quality, our car is also boasting the strongest residual values ever achieved by Ford, with the exception of the Focus RS. Forecasts of around 53% at three years/30,000 miles will allow it to attract low monthly payments.”

Based on the S-Max platform and launched in Europe after considerable success across the US, the Edge gives Ford its third SUV after the Kuga and EcoSport and, with a sub-£30,000 price, the all-drive lead-in car is fiercely competitive with popular German models, despite a comprehensive features list that includes active noise cancellation, colour touchscreen and keyless start.

For all that, more expensive versions are expected to account for the bulk of the 5,000 annual sales that Themistocleous is aiming to achieve.

“B2B and SME customers have flexibility of choice and typically opt for higher grade versions,” he said, as the Edge was being previewed in Germany. “That also applies across the larger corporate sector and, while that level of sales might seem a modest number against my objective of 240,000 registrations for car and commercial vehicles over the year, I’m always looking for additional business – and an extra 5,000 volume represents an important contribution. I think the Titanium will be our core version.”

And it backs its substantial appearance with an upscale interior using minimal switchgear on an attractive, neatly detailed dashboard that has touchscreen navigation. Significantly, the car provides generous stretching room for five adults and has a load capacity that expands the 602-litre boot space to a maximum 1,847 litres volume with the rear seats folded.

In what is thought to be a first for a volume brand, the Edge also comes with gadgetry that harnesses noise to counteract noise as standard across the range and the feature is particularly effective with the lowest-output engine on the Titanium, which is generally subdued during main road cruising in a tall sixth gear but can be vocal when worked hard in lower ratios for maximum acceleration and overtaking manoeuvres.

“We’re not chasing volume and will sell less than 200 cars to the rental companies, but we are aiming to win conquest business with a vehicle that’s larger than the Volkswagen Tourag and almost as big as the Range Rover Sport, which is double the price,” said Themistocleous. “This is a compelling package for customers looking for for a full-up, five-seat SUV and I don’t think you’ll get much more car for the money than this.”