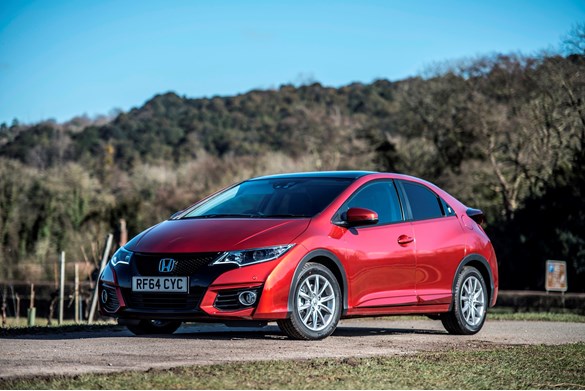 While Honda has adhered to convention in two of these areas with its refresh of the Civic – technology and styling – it has taken a different approach for the third: instead of inspired efficiency, it has cut the price.

While this figure may not be achieved in real-world conditions, Fleet News ran a pre-facelift Civic 1.6-litre i-DTEC ES-T as a long-term test car in 2013 and recorded a high of 70mpg and consistent returns of more than 62mpg.

Exterior changes to the revised Civic are restricted to new headlamps and rear lights, as well as new bumpers, while the interior features new seat fabrics and stitching on the headrests, new door trims with chrome door handles and a control panel finished in metallic black.

The revisions have also seen the Civic become the first Honda in the UK to have agile handling assist, which applies a light braking force to the inner wheels when the steering wheel is turned, and to the outer wheels when the steering wheel is returned to centre. Honda says this, combined with updated vehicle stability assist, increases vehicle responsiveness, stability and traction.

While it was difficult to assess the impact of these systems during our test route, the Civic was comfortable and easy to drive, with light but positive steering and a lovely, precise gearshift. The cavernous boot can carry 477 litres of luggage and Honda’s ‘magic seats’ system makes it simple to fold the rear seats in a number of different configurations.