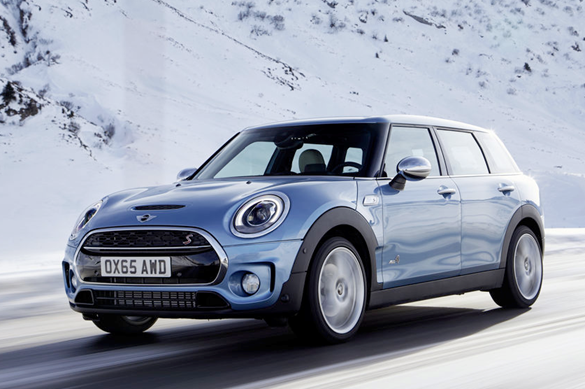 The lower-medium sector is perhaps the most crowded and competitive. It’s also the heart of the fleet sector, attracting mainstream and premium car manufacturers hoping to get a slice of some serious volume.

Mini realigned its Clubman model last year, taking it out of the small estate car niche and placing it in the lower-medium hatchback sector, targeting people who choose the Mercedes-Benz A-Class, Audi A3 Sportback, Volkswagen Golf and BMW 1 Series.

It launched with Cooper and Cooper S petrol models and a 150hp Cooper D. When I asked Mini executives last year if there would be an entry-level One model, it was denied, although now you can actually choose a Clubman One D which is the model that takes CO2 emissions below 100g/km.

Also joining the range at this time are two all-wheel drive-equipped models.

You can choose All4 variants in Cooper S and Cooper SD grades, the latter only available with the familiar ZF eight-speed automatic transmission available in BMW models.

Adding All4 gives the Clubman range an equivalent specification to other premium hatchbacks, many of which have a four-wheel drive option on high-end models, as well as the benefit of improved traction and stability on poor road surfaces.

The engine in the Cooper SD produces 190hp, and, depending on specification, can have CO2 emissions as low as 126g/km. This puts the car at the same level as the Audi A3 2.0-litre TDI 184 Quattro.

Orders have been open for All4 variants for a few weeks and Mini says there is currently around a 10% take-up.

The all-wheel drive system is new for the Clubman and different from that offered in the Countryman, optimised for the more sporty characteristics of the car compared to the semi-crossover Countryman.

The 190hp 2.0-litre engine certainly ensures the Clubman has plenty of pace, with a 0-62mph acceleration time of 7.2 seconds, delivered smoothly by the auto transmission and without the wheel-spinning antics that might afflict a two-wheel drive car with that performance.

The Chili pack is priced at £2,785 across all models, which might sound pricey, but represents a 30% saving on the Clubman compared with selecting the options individually.

The Clubman range now has the appeal to reach more user-choosers than ever, seeing off more derivatives of equivalent cars at rival premium brands, but we rather want to try the One D to see what the entry-level model means for a company car driver.