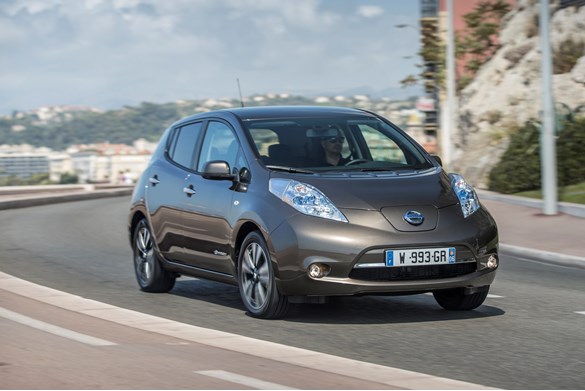 It might only have been on sale in the UK for four-and-a-half years, but the Nissan Leaf is now entering what the company calls its third generation.

The first British-built Leaf models 18 months ago marked the car’s ‘second generation’ with a number of updates, not least extending the range (according to the official testing procedures for plug-in vehicles) from 109 miles to 124 miles.

The third-generation model available now comes with a handful of updates as well as the option of choosing a 30kWh variant at a premium of £1,596 over the standard 24kWh model, which has been priced down.

The 30kWh version will travel up to 155 miles between charges, which is a positive step for those people who might have been put off choosing a pure electric car because of range anxiety.

Real-world performance will vary according to driving conditions and whether any other systems on the car are sapping power during driving.

But the boost in range is most likely enough to get the car to the next motorway services charging point, should it be more convenient.

Nissan has used new material in the battery to increase energy density, so the greater range is achieved while using the same space.

The battery capacity warranty for this version is eight years – so if total capacity depletes to less than 75% in that time under the conditions set out in the warranty, Nissan will replace it free of charge. The warranty on the 24kWh battery is five years.

All Acenta and Tekna variants are equipped with the latest evolution of the NissanConnect EV infotainment system. Featuring a new interface and digital radio receiver, it also offers a seven-inch touchscreen that allows owners to zoom in and out of maps and flick between menus just by moving their fingers on the screen, similar to the functionality of a smartphone.

The Leaf 30 kWh also introduces a number of subtle exterior design changes including a new roof- mounted aerial along with the availability of a new bronze metallic paint option.

And, as electricity is cheaper to use than petrol or diesel, the more you’re able to travel in the Leaf, the more you stand to save versus a conventional car.

During our drive in the south of France, we were set a challenge over almost 100 miles to retain as much charge as possible, including driving to higher than 1,600m up the Col de Turini. After some uncomfortably slow driving with maximum energy regeneration and ‘eco’ modes selected, the car had 34% of its charge left, which would see 155 miles as realistic.

Better, though, to drive the Leaf as well as conditions allow and have an extra 20 miles in your pocket should they be needed.