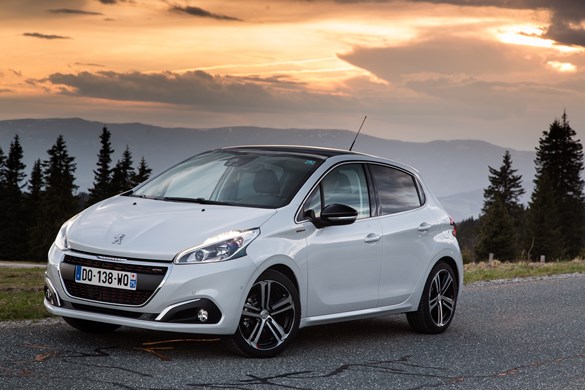 The 208 is Peugeot’s best-selling car in the UK – and the French carmaker is looking to make inroads ag.ainst its major rivals with a mid-life facelift.

“Around 45% of all Peugeot 208 sales appear in the fleet market, while more than half of all 208s sold are petrol powered. Our data suggests that this pattern will continue for the foreseeable future,” says Peugeot 208 product manager, Nicola Dobson.

Refreshing one of the UKs best loved small cars is certainly an important occasion for the French marque, but it’s not just design touches.

The power plants have become more frugal and green, offering lower CO2 emissions, making the car even more attractive to fleets. At present, the 208 is widely used in the public sector – in particular the NHS. Petrol engines make a lot of sense as these cars will spend a lot of time on urban roads.

The Peugeot has received a little nip-and-tuck, and to the casual observer there are very few differences between a 2014 and 2015 model.

Styling tweaks have been made to both the interior and exterior. The most obvious upgrades are on the front and include a new front bumper and a wider grille, while the headlamps are now two-tone with an LED signature giving the car a more dynamic look.

The rear has received a touch-up too. The tail lights have been enhanced and emphasise the 3D ‘claws’, while the profile is sharpened with sculpted sides and chrome window surrounds.

Even from the entry Active trim, customers receive a steering wheel that is trimmed in full-grain leather, while the materials are of a higher quality and the dash much softer to the touch.

Fleet credentials have been enhanced with the addition of active city brake and a reversing camera. These are also available from the Active trim.

The active city brake works in urban conditions and at less than 20mph.

The system makes it possible to avoid an accident or reduce the impact of a potential crash. This system should help keep insurance costs down and appeal to safety conscious fleets.

The reversing camera is available as an optional extra on the Active trim and should help in crammed city centre car parks. This is a useful option which could potentially wipe out the majority of dents and scratches and keep SMR costs down.

Peugeot is aiming to put more pressure on the class leaders including the Ford Fiesta and Volkswagen Polo. With the addition of new technology and a better interior, the 208 is certainly on the right road.

Both petrol and diesel engines are offered on the 208 range. Peugeot 208 Product Manager Nicola Dobson says: “My feeling is that we will move forwards with the new 208.

“I expect the 1.2-litre PureTech engine to be the most popular model in the fleet sector. This will be followed by the 1.4-litre HDi 70, which will actually become the 1.6-litre BlueHDi 75 when it eventually joins the 208 range.”

On the road, the little 1.2-litre PureTech 82 engine  feels nimble and agile, while it has more than enough power to whizz you past slower traffic on single-lane carriageways.

The 1.6-litre BlueHDi 75 makes the steering a tad heavier while the front also feels much heavier. The 208 is a much better drive when mated to a petrol engine.

Load space in the 208 has remained the same as before. With the seats in place there are 285 litres.

Fold the rear bench and the boot space expands to 1,152 litres. That means the 208 has a larger load space than two of its direct rivals with the seats folded – Ford’s Fiesta has 974 litres while the Volkswagen Polo offers 952 litres.

Peugeot is looking to grow sales within the fleet sector and these new updates available with the additional technology give the 208 a real chance to woo more company car drivers in to its model line-up.