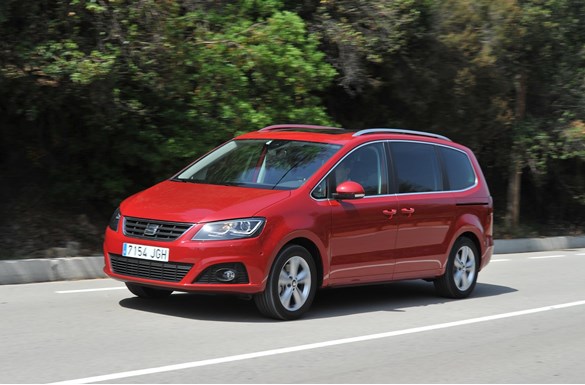 Advanced technology and improved packaging are being enlisted to help Seat win a greater share of multi-purpose vehicle sales when the new Alhambra reaches UK showrooms in September.

But a lower entry price point is also set to play a key role in extending the popularity of a model that is currently accounting for 10% of registrations in its market segment, believes Seat UK product planner Steve Murfin.

“We’ve had a lot of success but the landscape for large MPVs has changed. There's increasing interest in models like the C4 Grand Picasso and the Zafira Tourer, so we plan to compete at the lower end of the sector with a lead-in car that costs £600 less than the present entry model.

“With a 1.4-litre petrol engine that’s as powerful as the 2.0-litre TDI, it should help us attract extra business in an area of sales that is growing, even though most fleet operators will continue to prefer diesel,” he told Fleet News.

Company purchases account for 70% of Alhambra sales and the latest version of fleet favourite SE is 4% more expensive than the current car, mainly due to the cost of new technology under the bonnet and inside the cabin.

“Despite delivering extra power, the new TDI is a lot  more competitive because it has lower emissions and substantially better economy. Along with enhanced specification, these improvements are also reflected in better residual values," said Murfin.

Like its sister seven-seater car, the Volkswagen Sharan, the Alhambra maintains much of the appearance of the second-generation version launched five years ago but gets freshened looks from subtle revisions to the front grille, wheels and new rear LED lights clusters.

But greater revision inside provides clearer instruments and switchgear on a new dashboard which houses a neat infotainment screen featuring MirrorLink technology with improved connectivity. With all seats in position, luggage capacity is 267 litres but this rises to 2,297 litres when the rear seats are folded to provide a flat floor accessed via sliding side doors and a wide tailgate. Both figures are unchanged from the outgoing model.

Given that it is designed for maximum space and practicality, the Alhambra displays tidy, well controlled handling and minimum body roll during brisk cornering. It accelerates smartly from rest and light controls make it easy to drive – particularly so on the open road, where cruising is relaxed and quiet with a high sixth ratio keeping engine speed down to less than 2,000 revs at 70mph.