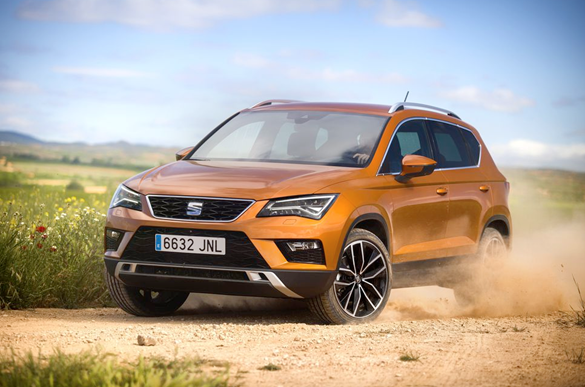 It’s impossible to understate the importance of the Ateca to Seat. Up to now, its line-up has covered just over half the car market. By the end of 2017, it will cover almost three-quarters.

In addition to bringing new customers to the brand, chief executive Luca De Meo has signaled its appeal to user-choosers. Ateca signals the beginning of a product offensive that will see Seat compete in two new sectors, as well as revitalising its two biggest selling models.

We’re expecting to see a revised Leon appear at this autumn’s Paris motor show, with a completely new Ibiza at Geneva in March 2017, the latter being the first Volkswagen Group small car to use the latest flexible MQB platform.

Later in 2017, Seat will launch a smaller SUV that will rival the Nissan Juke and Vauxhall Mokka.

The Ateca will arrive in the UK in September, three months after the latest Volkswagen Tiguan, and it won’t be a surprise to learn that both cars are closely related.

This means Seat’s first SUV arrives on the market with the very latest technology in terms of safety, fuel efficiency and convenience, capable of rivaling some of the most desirable user-chooser models in the sector.

For fleets, the diesel engines are likely to be of most interest, particularly the 115hp 1.6-litre TDI, with CO2 emissions of 112g/km. We were only able to try 2.0-litre diesels on the event, equipped with four-wheel drive, although two-wheel drive versions of the 150hp 2.0-litre TDI have CO2 emissions from 114g/km, rising to 116g/km for DSG auto-equipped models.

But there are a few interesting petrol options too. The entry-level car, priced from £17,990 on the road, has a 115hp turbocharged 1.0-litre TSI three-cylinder engine, wearing an Ecomotive badge (like the 1.6-litre TDI). Fuel consumption on the combined cycle is 54.3mpg.

Perhaps more appealing is the 150hp 1.4-litre TSI, which comes with cylinder deactivation technology (running only on two cylinders when coasting or under light load to reduce fuel use), which has figures close to the 1.0-litre, making it all the more impressive. CO2 emissions of 125g/km and 52.3mpg on the combined cycle aren’t at all bad for a 150hp petrol medium SUV.

We drove the all-wheel drive versions in range-topping ‘Xcellence’ specification.

This has CO2 emissions of 128g/km and fuel economy of 57.6mpg on the combined cycle.

A two-wheel drive version of the same engine is available with a seven-speed DSG, while there is also a DSG-only 190hp 2.0-litre TDI.

Styling is subjective, but Seat seems to have done a great job of maintaining the main cues that identify the brand, creating a vehicle with much more presence. It looks purposeful and agile.

We put some of that agility to the test on a specially created obstacle course, which could only be completed safely with the aid of four-wheel drive, hill descent control and the additional ground clearance the Ateca has over the Leon Xperience all-wheel drive estate car.

We also used some other available technology to drive a short course completely blind (glass was covered with a vinyl wrap) using the 360º cameras available as option in the Top View pack. It also involved reversing up to a trailer in the precise position needed to hitch it to the tow bar using a guide on the screen.

The interior fittings are up to the high-standard we now expect from Seat, with perhaps fundamentally only the design alone separating it from what you’d get in a medium-sized Audi.

And the Ateca’s agility off road hasn’t affected its on-road behaviour. It feels nimble in all environments, and the 2.0-litre diesel engine is smooth, with a reassuring turn of speed.

All models come with LED daytime running lights, with entry-level cars having a five-inch touchscreen display and USB and SD card connectivity. SE models have an upgraded touchscreen display with Bluetooth integration and voice control. These also have full-link system for smartphones, displaying and using key apps though the touchscreen.