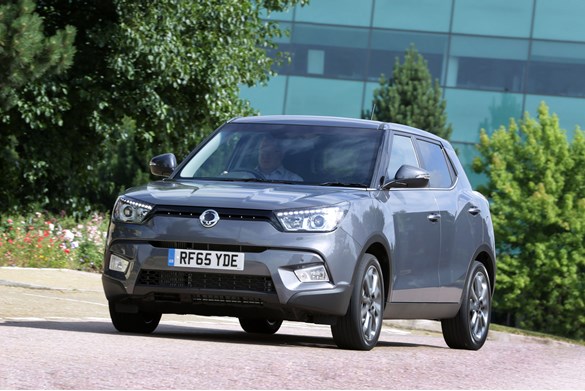 SsangYong has perhaps unfairly been seen as the ‘other’ Korean car manufacturer. Smaller than Hyundai and Kia, with a focus on 4x4s, the brand has been competing in niches of the UK car market.

A few years ago the Korando was launched into the medium crossover sector, in the same market segment as the hugely successful Nissan Qashqai and Kia Sportage. Were it not for the lack of a small-capacity diesel engine (the Korando uses a 2.0-litre), it might even attract the attention of fleets.

Now SsangYong is targeting the sector below – one where there has been a huge increase in new models over the last few years.

The SsangYong Tivoli goes up against successful cars such as the Nissan Juke and Vauxhall Mokka. And while it can’t hope to sell in similar volume, particularly into businesses, it certainly has many of the right ingredients to succeed.

It’s squared, robust styling has a certain appeal, and it is available with both petrol and diesel engines. Lowest CO2 from the diesel is 113g/km for the six-speed manual, which might not be the best in the sector, but is still fairly low and combined with aggressive pricing should present an attractive BIK tax proposition. The entry level 115hp 1.6 D SE has a P11D value of £14,145. The 110hp Vauxhall Mokka 1.6 CDTi Tech Line falls into the same 20% BIK tax bracket but, priced at £18,349, it would cost company car drivers almost £10 a month more in tax.

It makes the higher specification variants, the EX and ELX, appear more attractive. Initial expectations were that the medium EX grade would be most popular, but orders for petrol variants, which have been on sale for two months,  suggest a richer mix of the ELX is likely.

Both petrol and diesel engines come with six-speed manual transmissions as standard, but automatic transmission is also offered. Four-wheel drive is available on the diesel, with CO2 of 123g/km for the manual.

We drove a diesel on a route that included a mix of urban traffic, out-of-town roads and motorways and it proved a smooth performer, if perhaps a little lacking in noise insulation compared with some rivals.

The ride was on the firm side but certainly no less comfortable than a Nissan Juke, and while the steering lacked a little feel, the car still instilled a good degree of confidence on all roads. The Tivoli isn’t perfect to drive, but it’s pretty good.

It might be happening a few years after the other Korean brands in the UK, but SsangYong is coming of age at last.