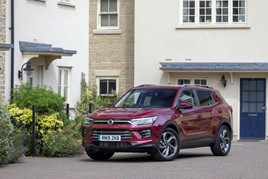 A new investor is reported to be taking a majority stake in SsangYong Motor Company (SYMC) from owner Mahindra & Mahindra, which would enable the car maker to avoid going into receivership.

Mahindra expects to sign a non-binding agreement with the unnamed investor by the end of the week, Pawan Goenka, manging director of the Indian car company, confirmed at a virtual press conference.

SYMC applied for bankruptcy to South Korea’s Seoul Bankruptcy Court on December 21, 2020, after the impact of the Covid-19 pandemic left it facing financial difficulties.

The business missed a repayment of 60 billion Korean Won to JP Morgan Chase Bank, South Korea, which was due on December 14.

An official statement published on December 22 said SYMC had decided to apply for rehabilitation procedures including a Company Property Preservative Measure, a General Prohibition Order and Autonomous Restructuring Support (ARS).

Under the ARS scheme the company was granted two months to find a solution to its financial difficulties, during which it will be managed by Mahindra without court intervention.

If the deal with the new investor concludes by February 28 then the business will continue to run as normal, with Mahindra retaining a minority stake or 25-30%.

Goenka said if the deal doesn't happen then SYMC will go into court receivership and its management will be taken over by the court.

SsangYong Motors UK continues to operate as normal, however.

Kevin Griffin, managing director for the brand in the UK, said: “Whilst this situation is not ideal, I strongly believe that the Autonomous Restructuring Programme will result in the birth of a stronger company.

“I want to reiterate that our UK operations are totally unaffected, and we are very much open for business.”

An SYMC source added: "We very much regret this situation which is the result of the difficulties being experienced from the worldwide Covid-19 situation, and the concern caused to our partners and stakeholders, especially our employees, sales networks and financial institutions.

“We are making every effort to transform the situation, and to build a more robust and competitive company for the future.”

Rental provider Hertz has filed for Bankruptcy in the USA and Canada following losses during the Coronavirus pandemic.