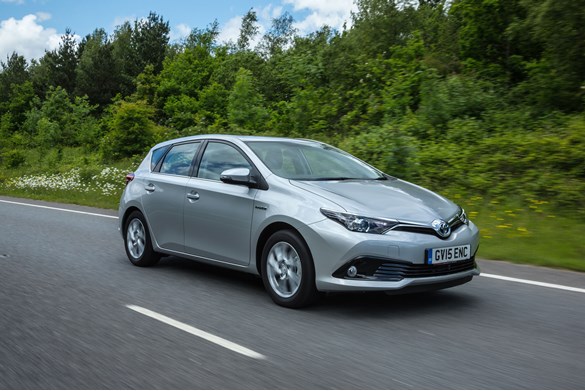 By all conventional measurements, the second-generation Toyota Auris has been a success.

It has increased Toyota’s share of the lower-medium sector in Europe (from 3.5% to 5.9% over the last three years) at a time when mainstream manufacturers are coming under increasing pressure from premium and former budget brands.

The sharper looking second-generation model, introduced in 2012, certainly struck a chord with both fleet and retail customers. Much of its success can be put down to the option of a hybrid model. Toyota hybrid technology is now in its third generation, and the cost of purchasing an Auris Hybrid is on a par with a diesel car offering the same power.

The hybrid has taken a 55% share of Auris sales in the UK. The revised model – on sale now – has CO2 emissions from 79g/km, and is likely to remain the most popular powertrain choice. But there are other improvements in Auris engine choices. The 89hp 1.4-litre diesel now has CO2 emissions from 92g/km, while Toyota has added a new 112hp 1.6-litre diesel, – sourced from BMW – to the range, with CO2 emissions from 108g/km. There is also a new 116hp 1.2-litre turbocharged four-cylinder petrol engine, which has emissions at 106g/km (manual from 112g/km).

The hybrid is still expected to be the most popular choice and, to reflect that, Toyota has made the full range of equipment grades available on it, rather than restrict it to medium and high-specification versions.

Further up the range, larger alloys are standard, plus a more sophisticated touchscreen interface and dual-zone climate control. All models in the sleeker looking Auris range, apart from Active, are offered with Toyota Safety Sense as an option, which includes autonomous emergency braking, traffic sign recognition, lane departure warning and automatic high beam.

The hybrid version’s powertrain remains the same as before, with smooth acceleration and lack of noise intrusion creating a very relaxed environment. The Auris is now a little sharper to drive, with a better steering feel and improved body control. The hybrid will be most appealing to fleets seeking to minimise BIK tax payments, particularly those who do a lot of urban driving, where the electric motor helps save more fuel. But the whole Auris range, with new petrol and diesel engines, now looks a lot more attractive.