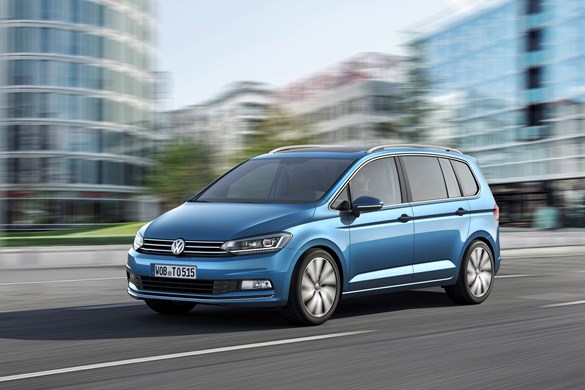 Smarter styling and innovative packaging are expected to prompt more business drivers to give second looks to the latest version of Germany’s most successful compact multi-purpose vehicle in the next few months.

“Compared with the current range, efficiency levels have been greatly improved to enable customers to enjoy considerable benefits in terms of reduced operating costs,” she told Fleet News.

Pricing is yet to be fixed, but the 4% more efficient 1.6-litre TDI motor is likely to take the cost of the new SE to more than £25,000 when it becomes available in December. “This is the result of the considerable investment involved in developing a new power unit to meet Euro 6 emission regulations, although we are now also offering a lot of additional equipment,” said English.

“This car represents a big step forward. It is now able to boast the maximum interior space on the smallest possible footprint and I think it’s an all-round better package that will appeal to a greater number of fleet users.”

As the range was being launched to the media in Holland, English said the improvements would help Volkswagen UK maintain annual fleet registrations of the Touran at around 2,500 units despite increasing competition in the sector.

“Tailpipe emissions have still to be confirmed, but the provisional figure of 116g/km that we’ve been given should play a big part in the success of this car. That’s a big improvement on the 121g/km of the current unit and I’m confident this will be welcomed by those users who need a vehicle that’s practical for family use as well as one that meets their daily work needs,” she said.

The latest model to use Volkswagen’s clever MQB platform is lighter, despite being longer and wider.

Even though overall height has been reduced, an extended wheelbase allows a much bigger interior with space for seven, up to 1,857 litres of cargo volume and a total of 47 storage compartments.

A big advance over the current car in practicality is that all rear seats fold to provide a flat floor that’s easily accessible via the large tailgate and a folding backrest on the front passenger seat now allows the interior to accommodate items up to 2.7 metres long.

Developing 5hp more than its predecessor, the new engine proves to be a lively performer through the gears. Thanks to a high sixth ratio, it spins at just 2,000 at 75mph to promote the relaxed, easy cruising characteristics that help take much of the strain of long haul trips.

‘’Adding an extra 130mm to the bodywork has made a big difference to the Touran and we think it is more visually appealing. It also incorporates the new technologies that can be offered on the MQB platform,’’ said English.

‘’This means that the interior of the car now stretches to 1,779mm, which is 63mm longer than the previous model.

“That makes it considerably easier to gain access to the rearmost seats in addition to improving the practicality and versatility that are so important to fleet users.

‘’But we are expecting the addition of a Family version of the SE to have particular appeal in the user-chooser area. As well as coming with family-friendly items, like a panoramic sunroof with integrating lighting and three-zone climatic air conditioning, we’re planning to offer this car with Discover sat-nav equipment and a cargo management system at a bundle price that promises to make it very competitive.”

As with other MQB-based models, the Touran now has a long list of options that include trailer assist, park asist, side assist with rear traffic alert, keyless entry and a power-operated tailgate.