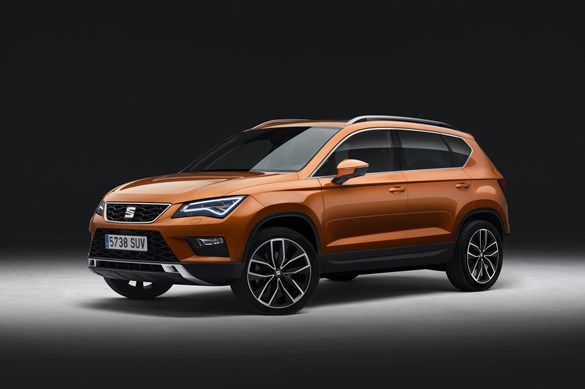 The first Nissan Qashqai started a sector by combining the family hatchback with the SUV. A decade later, so-called ‘crossover’ cars account for nearly a quarter of Europe-wide car sales. No volume manufacturer can be without one these days, it would seem. For that reason, the new Seat Ateca crossover SUV is probably be the most important car the Spanish company has ever made, with significant growth expectations depending on it. But does it have what it takes to appeal to the masses in a mature and very crowded market? Early signs are good.

Based on the same Volkswagen Group platform that underpins the Seat Leon and Volkswagen Golf, and sharing much with the forthcoming second-generation Škoda Yeti, the Ateca is one of the sharpest crossovers ever designed. It’s perhaps not as rakish as we might have expected, but it oozes class from every angle, with side creases mimicking the Leon’s, distinctive front and rear LED strips and those signature pointy-door mirrors. These conspire to hide the Ateca’s bulk – at 3.65m long, it’s slightly shorter than a Qashqai but actually quite high-sided in order to provide maximum headroom.

Much of the cabin, including Seat’s class-leading touchscreen infotainment system, is lifted straight from the Leon, and the blend of simple design and high quality, soft-touch surfaces give the Ateca a real premium feel. Touches like kerb light projectors beneath the wing mirrors add to that feel. Most importantly, though, interior space is exceptional, with masses of rear leg and headroom – and a boot capacity that trounces most of the competition: 510-litres (front-wheel drive versions) against the Qashqai’s 430 and the Ford Kuga’s 406.

Diesels will have a 1.6-litre TDI with 114hp and two 2.0-litre TDI units with 148hp or 187hp, the latter the most powerful Ateca at launch with a 0-62mph time “under seven seconds”, according to Seat (as yet officially unconfirmed). There’ll be a 148hp 1.4-litre TSI petrol version with cylinder shutdown technology too. But the real surprise is the entry-level model, powered by a 1.0-litre TSI petrol. That seems small for a car of this bulk, but Seat assures us this turbo unit will be plenty. Front-wheel drive versions are standard, with four-wheel drive available on more powerful models, and DSG automatic transmission an option in place of the standard six-speed manual.

As per the Leon, Seat has been able to pick from the top shelf of the Volkswagen Group technology warehouse, so the Ateca is available with systems like traffic jam assist, capable of steering, braking and accelerating the car at low speeds in dense traffic – one step away from autonomous city driving. There’s also automatic low speed city braking, with pedestrian protection and a top-down parking camera, while the top-level infotainment system includes Apple CarPlay, controlled via an eight-inch high resolution touchscreen.

Confirmed CO2 will range between 112 and 131g/km, and average economy ratings 56-66mpg. The Ateca will be priced aggressively too, undercutting the Qashqai by starting at around £18,000 and stopping at just under £30,000 in the top-level trim, called Xcellence. A generous standard specification includes alloy wheels, touchscreen infotainment, Bluetooth and electronic parking brake. To further bolster value, the company will push low-priced technology packs, including the full LED headlights that made the Leon so distinctive during its launch in 2012. Strong residuals are expected too.