FORD’S Fiesta supermini celebrates 30 years of production this year. It is something of a British stalwart, and 2006 sees the introduction of the latest incarnation.

It is broadly similar to its older sibling, the mark VI, which was unveiled in 2002.

Squint at the new car from a distance and you’d be hard-pressed to tell the difference, but there are a few changes, inside and out, to the facelifted version which Ford hopes will make an already popular package even better.

There are new, reshaped light clusters front and rear and the bumpers and bonnet have been given a more chunky feel.

The older car had a rather scratchy interior feel and so the dashboard in the latest car has been textured with soft-feel plastics.

Our test car was a 1.25-litre Zetec Climate, with 74bhp. The changes to the exterior work well – the car still looks modern even though it’s essentially a four-year-old design.

The new lights make a big difference, thanks to their three-dimensional casings, and the new bodystyling gives it a more purposeful and less utilitarian look.

Inside, the soft-touch dashboard – a dashing red in our car – is a huge improvement over its predecessor, but it’s a shame that other interior panels didn’t get a similar makeover.

Look sideways or down and that horrible scratch plastic remains and is as nasty as it used to be, despite being solidly put together.

However, Ford has thrown extra goodies in to ease the blow.

A great favourite was the auxiliary-in socket in the centre console, into which can be plugged either an iPod or any other miscellaneous MP3 players.

Don’t expect to be able to control it via the car stereo buttons – it’s not that high-tech – but it’s still a great plus to be able to listen to a digital music collection on the move. Just make sure you put together a playlist before you set off.

Once out on the road, the Fiesta is much more fun than its modest power would suggest.

As with the previous incarnation, it handles like a go-kart – nippy through city traffic but still fun on the twisty bits. The ride is firm, but not harsh.

Steering feel and weight are good, and the 1.25-litre engine is spirited, if not over-endowed, with power.

This lack of oomph can mean a noisy drive when the engine is pushed, particularly on the motorway.

However, the gearbox is precise and solid and completes a good driver package. 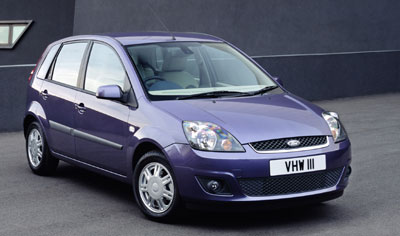 It wasn’t cold enough to test these during our time with the car, but the heated screen on our long-term Focus is a godsend on frosty mornings.

The new Fiesta is not really new, but a tweaked version of a product already available.

A sleeker look and more modern dash can’t really disguise the fact that this car is getting on a bit, but that said, it’s still well put together and fun to drive. 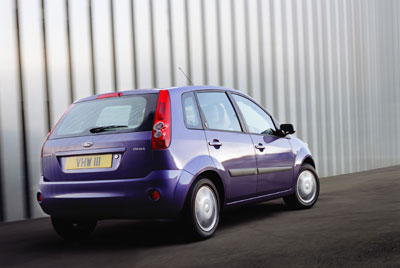