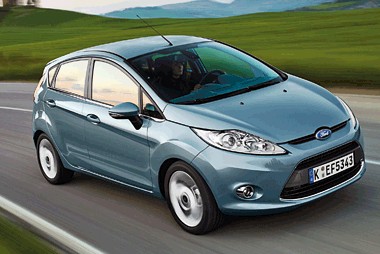 The industry generally refers to the Ford Fiesta as a supermini, although that tag is looking less and less suitable as every incarnation of the model arrives.

Take the new Fiesta, a car which has grown not just in size, but also in stature and confidence. It wears a striking new look which demands attention and has a size and footprint which elevates it into a new niche, somewhere between the supermini and lower-medium sectors (slightly lower-medium, perhaps?).

This is reflected in the pricing of the new range – our test car, a mid-spec 1.4-litre petrol, costs the best part of £12,500 which is not far short of an entry-level Focus.

This includes the recent price hike from Ford which has added £654 to the P11D price of the car.

As a result, its benefit-in-kind tax bill has gone up by £2 a month for a base rate taxpayer. Not a huge amount, granted, but £2 a month in the context of a £29 a month car is more startling.

So what do you get for the money? Under the bonnet is a 1.4-litre petrol engine delivering 95bhp through a five-speed manual gearbox.

It’s a peppy little engine, zinging up the revs with gusto and making an enjoyable car to drive. The gearbox shifts in a slick manner and adds to the fun.

The Fiesta also rides and handles very well, with a decent balance found between comfort and road-holding.

It adds up to a car which can cope with urban work but is a viable option for drivers who cover longer distances in the course of their work.

The interior is well made and nicely designed, with a funky appearance to appeal to younger drivers. Internal space is very good, especially headroom, and the boot is more than adequate for most uses.

The 1.4 Zetec five-door is proably the pick of the new Fiesta range.

It is cheaper to buy than the equivalent diesel by nearly £500, and with unleaded currently 10 pence per litre cheaper than diesel, it will take nearly 33,000 miles for the diesel’s better fuel economy to pay for its extra front-end price.

The Fiesta is a very good car, but how does it fare against its rivals? Read on...

The Honda looks expensive on paper, but it is the best equipped of our quartet, with traction control, cruise and climate control, and electric windows all round as standard. The Mazda is the most powerful with 103bhp, while the Corsa has 90bhp.

The Corsa has the lowest P11D price but the highest emissions, putting it two BIK bands higher than the rest. As a result, it will cost a 20% taxpayer £33 a month in BIK tax, compared to monthly bills of £32 for the Honda, £31 for the Fiesta and £29 for the Mazda.

A combination of the shortest service intervals (12,500 miles) and biggest wheels (16-inch) spell the highest SMR costs for the Mazda. The Honda and Vauxhall have similar sized wheels but have longer intervals – variable for the Jazz and 20,000 miles for the Corsa. The Fiesta has 15-inch wheels.

It’s tight between the Honda and Ford, with the Jazz pipping the Fiesta in all sections bar SMR costs. The Mazda and Vauxhall are off the pace, costing £1,000 more than the leading two – the Corsa hit by a low RV prediction and high SMR costs blighting the Mazda’s challenge.

The Corsa and Mazda2 are the first to be discounted due to their running costs – they will cost at least £1,300 more to run over the typical fleet lifecycle of three years and 60,000 miles than the others. This leaves the Fiesta and Jazz. Both are very good cars which will suit both urban-based staff and also those who need to travel further afield.

The Honda has a slight advantage in running cost terms and is better equipped than the Fiesta. As a result, it sneaks the win, although drivers opting for either model won’t feel short-changed. For small cars, these models both offer a much broader range of abilities than their ‘supermini’ tag would suggest.