BEING young, free and recently non-single, the last couple of weekends have seen me trekking from Peterborough to Southampton to see the lady currently holding my affections.

Don’t worry, I’m not about to subject you to 500 words on my love life. The point is, my knack for picking partners who live miles away provides an excellent opportunity to spend time with the Focus.

As mentioned last month, the Ford is a joy on country roads. It corners like a whippet and pootles with ease over glen and vale, but none of this means a thing on the southbound motorways. With hardly a bend in sight, I’m now interested in cruising ability, and how comfortable a place the Focus is to lose the will to live in on the stationary M25.

The first thing to irk is the lack of sixth gear. In motorway fast lanes usual cruising speed results in the rev counter showing 4,000rpm, and after 160 miles the buzzing whine begins to annoy.

Being able to snick the gearbox into sixth and cruise at lower revs would bring that noise down and maybe even prise some extra miles out of the tank. The Focus-rivalling Vauxhall Astra’s manual transmissions are all six-speed, but only the 2.0-litre TDCi and the forthcoming ST Focus offer the extra cog. A shame.

Not shameful, however, is the rather splendid sound-system. Already impressed by the clear and powerful sound pumped out of the speakers, I was giddy with delight to discover I could plug my MP3 player into a jack input in the glovebox.

Thus my inevitable stay on London’s orbital car park was tempered by instant access to my entire music collection. (Apologies to anyone in Rickmansworth disturbed by my karaoke renditions of Metallica’s Black album.)

Since I first tried the Focus I’ve been impressed by the automatic gizmos that it flaunts. But lately the daylight-sensing headlights have been playing up a little.

For example: heading down the A1M in broad sunshine, the arrival of the Hatfield tunnel prompts the electro-fairies to fire up the lamps as expected. But several miles out of the tunnel and the lights are still blazing away, despite the sun’s continuing presence.

Flicking the auto switch on and off doesn’t work, and neither does pulling over and restarting the engine.

Enraged, I leave the auto option off for the rest of the trip, because having the lights on means the sat-nav display goes to a colour scheme which is virtually impossible to see during daylight hours.

By the time I head home everything is normal again and the lights flick on perfectly as the sun sets. This has happened several times, seemingly at random.

Relationships can be so temperamental. 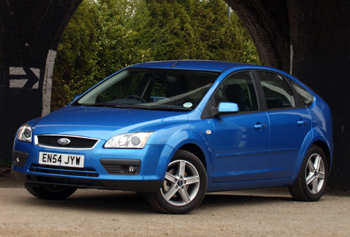