Don’t drink and drive – drive the drink. That’s the message Ford is pushing with its new bio-ethanol scheme.

While diesel sales in Europe and the UK continue to climb, Ford is also looking at alternative, more environmentally-friendly fuel sources such as bio-ethanol – or alcohol to you and me. And although drinking it is probably not a good idea, it does a pretty good job as a substitute for petrol in most petrol cars. Its new bio-ethanol sipping Focus and Focus C-Max have been a sell-out hit in Sweden and Ford is now keen to roll out a series of similar pilot projects.

Ethanol is not new to the alternative fuel market – Brazil has been supplementing its petrol with ethanol derived from sugar cane since the mid-1980s. But compared to the Ford-favoured ligno-cellulosic method used for bio-ethanol production, Brazil’s process is somewhat primitive and energy expensive.

The ‘well-to-wheel’ CO2 level (the amount of energy needed to extract, store, distribute and use the fuel) is lower at 95g/km, versus 150g/km for diesel, with a dramatic drop in nitrous oxide and particulates emissions.

This, according to Ford, means bio-ethanol is the most effective alternative fuel for overall ‘well-to-wheel’ CO2 reductions, as well as offering substantially lower infrastructure costs compared to other alternatives like liquefied petroleum gas.

There are also a number of key financial benefits to the introduction of bio-ethanol, beyond the obvious. For a start, fuel stations need little modification to sell the fuel as it can be stored in the same tanks as unleaded or diesel and the pumps need no alterations.

And on a global stage, freedom from the reliance on fossil fuel would go some way to alleviating dependence on the Middle East and its political instability.

Ford first introduced bio-ethanol-compatible Focus models into Sweden in late 2001, when they were sold into the fleet market and the fuel was only available through a sole supplier via a handful of filling stations.

In early 2002, the plan was extended to the retail market. It took off. Last year, the Flexi-fuel Focus accounted for 80% of all Focus sales, giving Ford an 80% Swedish market share in alternative fuel vehicles. Demand for the fuel means one in four fuel stations – that’s 220 across the country – now stocks E85 fuel.

The car is only £175 dearer to buy than the equivalent petrol-powered model – hardly a major price deterrent. And bio-ethanol has the added benefit of propping up the residual values of the Focus and C-Max models way above their unleaded or diesel equivalents.

The Swedish plan is enhanced by some seriously attractive benefits of switching to E85 bio-ethanol.

The fuel is exempt from mineral oil tax – a saving of 65p per gallon. Company car tax and insurance premiums are both reduced by a massive 20%, the bio-ethanol cars can park free in 12 key towns and cities in Sweden – worth around £1,000 a year in a big city like Stockholm – and the Swedish government has pledged 20% investment aid in any further bio-ethanol plants. 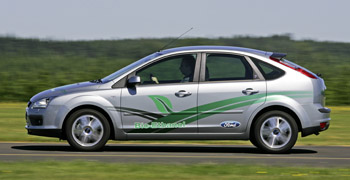 Driving the bio-ethanol powered Ford Focus is much the same as driving any other petrol Focus. Our example, a 1.8-litre Focus estate, felt like every other Focus estate we’ve driven, with the usual taut handling, firm ride and punchy performance.

And that’s the idea, according to Andrew Taylor, director of Ford’s Corporate Citizenship. He said: ‘What we want to do is make the car feel like an ordinary Focus, so that’s there’s no stigma attached to it or anything that makes the driver feel he’s driving something different or odd. It should look, feel and drive like a normal car. That’s crucial to customer acceptance.’

And there is no loss of performance – power and torque levels are the same as an equivalent petrol-powered Focus.

Fuel economy does, however, drop by around 30% over a standard unleaded car, simply because the bio-ethanol has one-third less the combustive energy of petrol.

This means a reduced range but, given the huge cost saving at the pump, this in unlikely to put off many drivers. Refuelling the Focus is exactly the same as for a standard vehicle – same kind of pump, same kind of fuel filler, just a much lower price. And if, for whatever reason, you cannot find bio-ethanol, the car can run on ordinary unleaded – hence the Ford’s Flexi-fuel badging.

Changes to the car itself are minimal. Because bio-ethanol is more corrosive than unleaded, the engine has hardened valve seats and the fuel lines that link the tank and the engine are fitted with more robust seals and gaskets.

The engine’s ECU electronic black box is also recalibrated to detect the varying ratio of bio-ethanol to standard unleaded and adjust the ignition accordingly.

The result – up to a 70% reduction in overall CO2 emissions over a standard 1.8-litre petrol Focus and 40% over an equivalent diesel.

How bio-ethanol is manufactured

The pilot plant – a scaled-down version of a full-size unit – has the capacity to produce just over 40,000 gallons of bio-ethanol a year and is run by BioFuel Industries, a consortium of Sweden energy companies and private energy concerns. The plant runs on pine sawdust from a local and sustainable forest source.

The sawdust is steamed to pre-heat the material and eradicate any air it may be storing. Hemicellulose – the sugar contained within the wood – is then leached out by acid at around 200°C to break it down into sugar and lignin waste product. This by-product can be burned as a further energy source.

The remaining sugars are then detoxified and fermented with yeast into ethanol. Once fermented, the yeast is removed for re-use and then the bio-ethanol is distilled in a cooling storage before being stored in tanks for final use.

The total cost of ethanol produced at Umeå is about £1.50 a gallon, around a third more expensive than petrol or diesel. In Sweden, this is added to standard unleaded at a rate of 85 parts bio-ethanol to 15 parts unleaded – hence the fuel’s E85 moniker.