THERE was a time when a car with more than 200bhp was considered something of a handful. Not even 20 years ago, Ford’s Sierra RS Cosworth was widely hailed as the bad boy of the road, mixing a turbocharged punch with an outrageous tea-tray rear spoiler which puts today’s Imprezas and Evos to shame.

But the Sierra had ‘only’ 204bhp, whereas the new Focus ST offers 222bhp. And it’s a sign of the times that today Ford is speaking of the ST as being a useable hot hatch which has sacrificed headline-grabbing power figures for performance that can be easily deployed.

You can translate this as ‘not as powerful as the Vauxhall Astra VXR but easier to drive and live with’.

And while it may fall 15bhp short of the Astra’s 237bhp output, the Focus ST still has more than enough power to entertain.

It uses a modified version of Volvo’s 2.5-litre turbocharged five-cylinder engine, mated to a reworked gearbox with shorter ratios to give more urgent acceleration.

The Focus ST will accelerate from 0-62mph in 6.8 seconds and will run on to 150mph flat out, but this is only part of the story.

Ford’s TeamRS, the division which develops competition and fast road cars, has worked to ensure there are copious amounts of torque available in all gears. That is certainly the case – the ST is as happy dawdling along at 40mph in fifth as it is wailing to the red line at 7,000rpm. And sixth gear cruising is a relaxed affair, with barely any engine noise making its way into the cabin.

It’s this schizophrenic character that Ford sees as a major selling point. Between 6,000 and 7,000 STs will be sold in the UK in 2006 and Ford estimates that as many as 60% of them will be corporate sales, with many going to user-choosers. 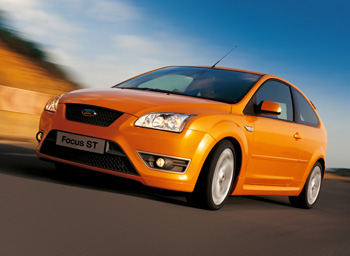 In the mid-1980s, the thought of Sierra Cossies on fleet choice lists would be unthinkable, but that won’t be the case with the Focus ST.

Firstly, it doesn’t look too outrageous. Despite the rear wing, flared wheelarches and deeper front and rear bumpers, plus a handsome set of 18-inch alloy wheels, the ST doesn’t attract too much attention (unless you choose the Electric Orange paint as shown here).

Secondly, it’s as practical as any other Focus. It’s available in three and five-door format (the latter costs an extra £600) and shares all of the attributes of its lesser stablemates.

And it’s not going to cost the earth to insure either, or certainly nowhere near as much as those Cosworths did.

But the Focus ST’s killer punch is its price. The entry-level ST costs £17,495, while the better-equipped ST-2 (it adds a Sony MP3/CD player, xenon headlights, heated front screen and ESP traction and stability control) costs £18,495. Both undercut the £18,995 Astra VXR and the Volkswagen Golf GTI, which costs a shade under £20k.

The ST-3 with 10-way electrically-adjustable leather seats and a six-disc autochanger costs £19,495.

In terms of performance per pound, the Focus ST is going to be a hard act to beat. 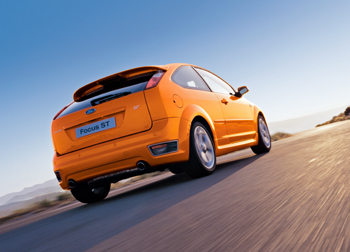 ALTHOUGH the Focus ST shares its engine with several Volvos, it doesn’t feel remotely similar. Which is a good thing, as Volvo’s lazy engines, with their smooth power delivery, just wouldn’t cut the mustard in a hot hatch.

Ford’s TeamRS has reworked the engine and transmission to make it feel sportier.

The shorter gear ratios help and once you get the turbo spooled up, the ST builds speed very quickly. TeamRS has also engineered the car so that every prod of the accelerator is met with a bellow from the engine making its presence felt in the cabin.

The ST is also very surefooted, with huge amounts of grip and excellent handling.

Understeer is not an issue unless you really provoke the car and even then the ESP system doesn’t intervene as early as it does in some other cars.

With a slick six-speed manual gearbox and brilliantly capable brakes, the ST is an enthralling drive.

But it can also cruise comfortably at 70mph without any fuss, which means you can enjoy the best of both worlds.

THE Focus ST feels just as happy hammering up twisty mountain passes as it does on the motorway. With such a competitive front-end price, Ford is offering potential Golf GTi and Astra VXR owners another option. 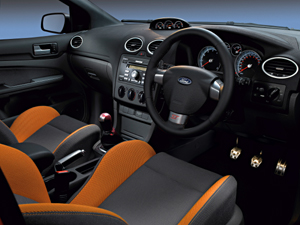