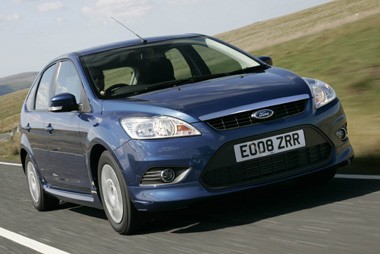 Eco-friendly versions of established cars are becoming a regular staple of the UK car market.

Many of the major volume manufacturers offer an ultra-green version of their vehicles – witness BlueMotion at Volkswagen, Skoda’s Greenline and now Ford, with ECOnetic.

The Focus is the first model to benefit from this treatment, with a Mondeo version due to be launched imminently.

The benefits to such a concept are obvious. Society is demanding we reduce emissions and improve fuel economy, and with the various taxes, duties and congestion charges drivers have to stump up for these days, greener motoring saves money.

Making existing cars greener can involve reducing power and weight, which can mean the driving experience suffers and popular luxuries such as air-conditioning go right out of the window.

For the ECOnetic, Ford has taken the standard Focus, added low-rolling resistance tyres and tweaked the bodywork to improve aerodynamics.

The bumper has been tailored, along with the sideskirts and rear spoiler. In addition, the car has been lowered 10mm at the front and 8mm at the back.

The external changes to the ECOnetic work really well. It looks pretty much like a standard Focus, but its lower ride height helps it appear slightly meaner, although the plastic trims over steel wheels detract from this slightly.

Don’t expect this sportier stance to be complemented by massive power though – under the bonnet is a 1.6-litre TDCi diesel engine, which produces 108bhp and returns 65.6mpg on the combined cycle.

CO2 emissions are 115g/km, taking it into the lowest tax and duty band for a diesel.

I’m a big fan of the Focus, and was relieved to find that the changes have not taken away the essence of the standard car.

The quality of build is still there, as is the excellent handling and feel.

The engine isn’t going to snap any necks with a 0-62mph time of 10.9 seconds, but it is peppy enough to take advantage of the chassis.

The claimed fuel economy is, as always, best taken with a pinch of salt, but I managed 50mpg without really trying.

Someone making a concerted effort to drive efficiently should manage considerably more.

Standard features include air-conditioning, ESP and electric windows and mirrors, as well as front fog lights and airbags aplenty.

Once again, Ford is not the first to market with a new idea.

Critics may say it’s been slow, but on the evidence of the Focus ECOnetic, it’s been biding its time and making sure its offering does all it sets out to do without compromising the core values of the brand.

The ECOnetic doesn’t feel like a compromise, it feels like a very good car in its own right.

The Megane is cheapest to buy but only just, with the Focus and Golf close behind. The C4 is some way back. Power is evenly matched all round, but the Focus lacks the alloy wheels found on its rivals – 16-inch on the Megane and Golf, and 17-inch on the Citroën.

The Focus emits the least CO2, but all four produce 120g/km or less, placing them in the lowest company car tax band for diesels. A 20% taxpayer faces a monthly bill of £36 for the Ford and Volkswagen and £35 for the Renault as it is cheaper to buy. The Citroën’s bill is £37.

Almost nothing separates the Ford and the Volkswagen over a three-year/60,000-mile fleet life. The Focus’ 15-inch tyres keep its costs down, as does the Golf’s variable service interval. The Renault has a rather small 12,000-mile service interval, while the C4’s lower profile tyres bump up its costs.

With claimed combined fuel economy of 65.6mpg, the Ford will cost £200 less to fuel over 60,000 miles than the second-placed Volkswagen. The Golf and Citroën both return 62.8mpg while the Megane manages 60.1mpg – putting it £400 behind the Focus.

The Volkswagen’s CAP residual value of 40% means it holds its value best over three years/60,000 miles. The Focus will lose around £1,000 more, with an RV of 33%. The Renault has an RV of 26% and the Citroën 28%, although the C4 loses more money due to its higher purchase price.

The Volkswagen works out as the cheapest to run over a three-year/60,000-mile fleet life, with decent showings in all areas. The Focus is around £800 more expensive while the two French cars lag behind by almost £2,000 – with the Renault faring slightly better.

This emerged as a straight fight between the Golf and the Focus, and while my heart says to go for the more exciting Ford, the logical winner is the cheapest option – the Volkswagen. Its strong RV proposition propels it to the top of the pile, although the Focus deserves a very honourable mention for being the cheapest to service and fuel as well as being the greenest in terms of CO2 emissions. Unfortunately, the French cars are outclassed by the rivals in all areas, with only the Megane gaining credit as the cheapest to buy.