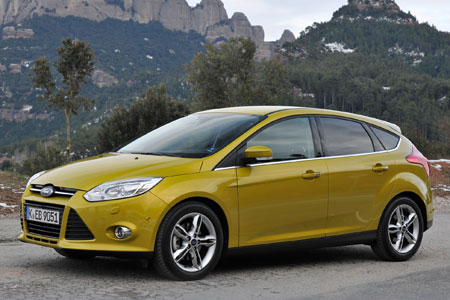 Set aside for a moment that the Ford Focus 1.0 Ecoboost uses a 1.0-litre three-cylinder engine, and look at some other relevant figures.

When the original Ford Focus was launched in 1998 it was offered with a 2.0-litre petrol engine that produced 130bhp. Its CO2 emissions were 207g/km. I forget the fuel consumption, but 207g/km would result in a ballpark figure of 32mpg on the combined cycle.

Now Ford is launching a 125bhp version of the latest Focus whose CO2 emissions are 114g/km (or 109g/km if you choose the 100bhp variant), and with fuel consumption of 56.5mpg.

In 14 years, advances in technology and engine downsizing has resulted in reductions in CO2 emissions and fuel consumption and the Focus 1.0 Ecoboost is perhaps the most remarkable current example, with cuts of more than 40% when using comparative power outputs.

No petrol-engined rival can match the Focus for emissions or fuel consumption, and this 125bhp version we drove is only 5g/km higher than the 1.6 TDCi.

In fact, the only important aspect of running costs where the diesel variant is significantly less expensive is fuel costs with a near-11mpg advantage on the combined cycle, and, as we know, this is based on the official cycle and not real-world conditions.

And with a now marked premium in the pump price of diesel over petrol, the breakeven point for diesel fuel over petrol is likely to occur at increasingly higher mileage.

Add to this the fact that many urban-based fleets have encountered problems with diesel particulate filters – which need frequent sustained periods of high-speed running to burn off trapped soot particles at high temperature – and efficient petrol engines are likely to look more attractive to a larger number of fleets.

State-of-the-art turbo technology results in exceptional efficiency and responsiveness. Maximum torque of 125lb-ft is available from 1,400rpm (up to 148lb-ft is available for short bursts, for example when changing down to overtake), so the engine never feels like it’s working too hard, and despite three-cylinder motors often producing a pronounced off-beat thrum, this one is especially refined.

Ford expects the 1.0-litre engine (which ultimately replaces both 100bhp and 125bhp versions of the normally-aspirated 1.6-litre petrol engine) to take a good 30% share of Focus sales in the UK, although in fleet it’s likely to be a slightly lower percentage given the sector’s favouritism towards diesel.