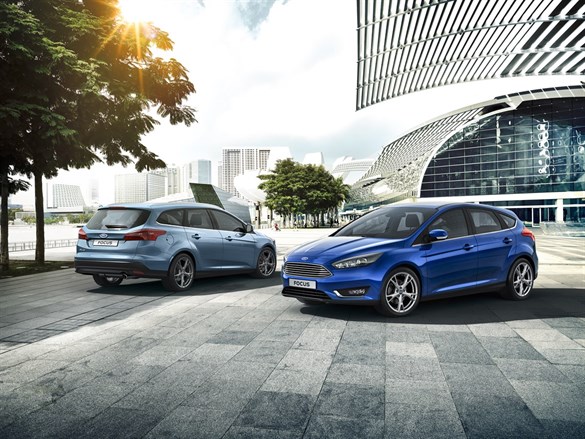 Improving a car that is already considered very good and regularly tops the sales charts in its class can be a game of diminishing returns. Not so for Ford’s mid-life update of its Focus, which now offers gains in economy and emissions of 10%.

Crucially, these gains are found in the new 1.5-litre turbodiesel that replaces the previous 1.6-litre unit. With 118bhp, this engine increases fuel economy to 74.2mpg while lowering emissions to 98g/km from the old 1.6’s 67.3mpg and 109g/km. Given this engine’s appeal to the fleet market, those are very worthwhile improvements.

There is also another new 1.5-litre engine in the shape of the 1.5 Ecoboost turbo petrol engine. It comes in 148- and 179bhp forms and is a real pleasure to use thanks to its broad spread of power and free-revving nature. However, Ford reckons these engines will account for only a small tranche of sales, with 90% of buyers split down the middle between the new 1.5 diesel and the 1.0-litre Ecoboost that is offered in 99- and 123bhp guises. Out of all Focus sales in the UK, 55% will be to fleet.

All of the new engines in the updated Focus range meet Euro6 emissions standards, moving on the from the previous car’s Euro5 standards. This has been achieved with a lean NOx trap fitted in the exhaust system, which works by the engine running very slightly rich periodically to burn off the nitrogen oxide without the need for an ammonia additive such as AdBlue.

Ford says it has achieved this by adhering three core values of sustainability, safety and innovation, with a fourth caveat of increased quality also informing the Focus’ update. Part of this plan also includes making the new engines better to live with, delivering a more enjoyable drive.

Rainer Wode, Focus Global Programme Manager, told Fleet News: ‘Every element of the Focus has been reconsidered and evaluated to make it better wherever possible. While each change on its own may not be a huge leap, they combine to make the car a noticeable improvement over the one it replaces.’

This attention to detail extends beyond the engine range and into the structure of the revised Focus. An example is the thickness of the metal used in parts of the front chassis, which have increased in thickness from 0.9mm to 1.9mm. There is a weight penalty, but Ford feels this is more than justified by the car’s great rigidity that is aimed at making it handle and steer more accurately.

As these are areas where the Focus has always excelled, it seems a little strange that Ford should concentrate its efforts so much in this direction. Wode says: ‘We have benchmarked the new Focus against its key rival and come up with a car that we think is better in every respect.’

That German rival is none other than the Volkswagen Golf and Ford has succeeded in making the updated Focus feel more like a Golf in the way it drives. The downside is Ford has lost some of the zeal that marked out he Focus as the most fun car in its class for driving.

Now, the steering misses the direct feel of its predecessor and doesn’t provide the same weight or precision when turned into a corner. It tones down the driving experience on twistier roads, though it does make the Focus a more relaxed car on the motorway.

Changes to the suspension, which is now more firmly located courtesy of new bushes, also make the Focus a better cruiser at the expense of its handling prowess. There is now an improved ESP system too that makes the car more stable in emergency avoidance manoeuvres.

A definite blessing is Ford’s new Sync2 connectivity system that allows the driver to access many functions by voice control with a button on the steering wheel. This is standard on the top two Titanium and Titanium X trims, which come with a new 8-inch touchscreen. It’s easy to use also offers a split screen for the first time in a European Ford model.

The Sync2 system with satellite navigation is available as a £500 upgrade on all but the most basic Studio trim, while for the two Titanium models it’s £250 to add the sat-nav.

Other changes to the Focus cabin include a new centre console that is less fussy and does way with the raft of buttons. In its place are simpler ventilation and stereo controls. Ford has also replaced the base Edge trim level with Studio, which retains the Focus’ low lead-in price. Titanium and Titanium X models, which account for 20% of all Focus sales, are now £100 cheaper than before to give company drivers a small financial fillip.

These changes, and the considerable gains in economy and emissions, keep the Ford Focus among the best in class and make it a more rounded proposition, even if that comes at the expense of some fun.