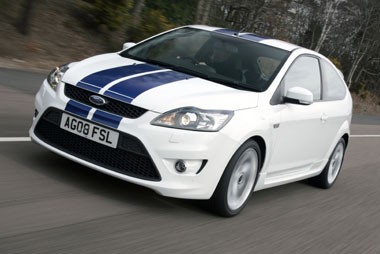 If ever there was a car in recent years that grabbed the attention of petrolheads on a relative budget, it was the Ford Focus ST.

When it launched in 2004, it banished memories of the oft-criticised Focus RS and hurtled to the top of the hot hatch ladder.

It took the best bits of the second generation Focus and whittled them down to a very sharp point, turning the family hatch into a snarling beast that provided an exhilarating drive.

It was equally at home being thrashed around a race track or taking the kids down to the supermarket.

And with its (optional) lurid orange paintwork, it was eye-catching too.

With the facelift of the common or garden Focus, Ford has decided its lairy variant could use a spruce up too.

Tweaking a car that always seemed destined to become a future classic is always dangerous.

Fans of the original – myself included – are keeping a close eye on any changes.

Thankfully, Ford knows when it’s on to a good thing and has taken the sensible option of barely changing anything at all.

What you get is the new Focus styling, which means the new family face which is infinitely more attractive than its predecessor.

Inside, you get a very familiar interior to anyone that’s been in the previous Focus.

Little tweaks here and there include a cool if rather pointless start button and an Easyfuel system will prevent you from putting diesel in your performance car.

Under the bonnet the same five-cylinder, 2.5-litre petrol engine lurks, ready to put out 222bhp and rocket from 0-62mph in 6.8 seconds.

And the suspension hasn’t been touched.

After admiring the handsome new face of the ST, you slip into the hugging Recaro seats and everything feels pretty darn good.

I felt the old ST had its seat mounted a little too high and while it’s been lowered by a few centimetres, it’s still not quite as low as I’d like. But it’s a minor quibble.

Hit the start button nestled into the carbon-fibre effect centre console and the five-cylinder engine barks into life.

It sounds great when you blip the throttle, although doing so won’t improve the already decidedly average fuel consumption – the official figures on the combined cycle are 30.4mpg, but from past experience I’d be astonished if anyone managed to get anywhere near that.

On the road it’s the same as it was before – glorious engine note that encourages you to keep the revs up whenever possible, slick gear changes and a chassis that changes direction like a startled bluebottle.

It might feel just slightly heavy at the front, but it’s still just awesome, and I still want one.

The best hot hatch has not really got much better, but it didn't need to. It just looks nicer, and frankly that's all I'd ask for.

For those looking for a hot hatch on limited budget the ST's £18,000 starting price makes it a very tempting package.