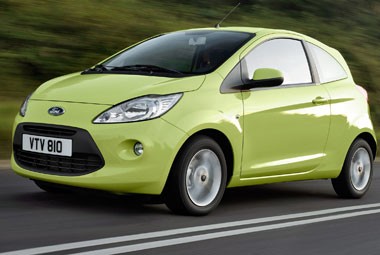 The sub-supermini segment represents just 8% of the UK new car market, but that’s twice what it was in 2003 and with ‘downsizing’ one of the year’s most popular motoring words, the sector is only going to expand further.

Ford’s contender since 1996 has been the Ka – a massive hit with close to 1.5 million units sold globally, plus the greatest customer loyalty and satisfaction of any blue oval model.

And while the tiny runabout has stayed almost unchanged in 12 years, the market is barely recognisable from what it was.

At 3.62m long, the MkII is exactly the same length as its predecessor.

But at 1.50m, it’s 10cm taller, creating a much roomier car with a higher driving position.

A four-seater with a three-door bodyshell, it’s built on the Fiat 500 chassis.

But Ford is keen to point out that much of what the Italians provided has been re-engineered – stiffened front anti-roll bars, softer springs, revised steering geometry – to create a more Ford-like driving experience.

Expertise has also come with the team behind the recently-launched Fiesta.

The Ka will remain predominantly a retail seller.

Roelant de Waard, chairman and managing director of Ford of Britain, said currently only 15% of sales are to corporate buyers, but that could rise.

He said: “We expect there will be an increase in fleet sales, but not in short-cycle business.

"The Ka will not be seen in the rental market.

"For anyone doing high mileage but wanting economy and a model with character and personality, the Ka will be an attractive option.”

But less than 5% of buyers will bother with it – petrol will remain the big seller thanks to its lower front-end price and economy not far behind the diesel.

It’s a Fiat-sourced 1.2-litre 69bhp unit and, like the diesel, is mated to a five-speed manual gearbox.

The Ka is on sale from January in four trim levels.

For comparison, the Fiesta starts at £8,695 while the Fiat 500 starts at £8,100. Studio spec is basic; twin front airbags, height-adjustable steering wheel and a six-speaker audio system with aux port for MP3 player connectivity.

With wind-up windows and a rear bench seat that folds as one, it’s not likely to be a popular choice.

Style, from £8,495, adds powered heated door mirrors, electric front windows, driver’s seat height adjustment and a 50/50 split back seat. Style+ adds air-con and a heated front windscreen, but boosts the price by another £500.

The flagship is Zetec, priced £9,495, and which is expected to account for half of sales.

The Ka diesel is available only in Zetec trim and costs £10,195.
Customisation has become an integral part of small car retailing and Ford has picked three themes for the Ka – Grand Prix, Tattoo and Digital Art.

The packages start at £300 for interior modifications and £500 for exterior. There’s a variety of coloured grille surrounds, interior trim and detailing.

Side and curtain airbags have been relegated to the Ka’s option list, meaning a four-star Euro NCAP rating is expected.

An ECOnetic low-CO2 version will follow next year, and later still will be SportKa and StreetKa versions.

The original Ka was known for two things – its spirited handling and cramped driving position for any driver above average height.

Thankfully, neither accusation can be levelled at its successor.

The 1.2-litre has to be worked hard through the gears to get any sort of performance – and it gets a bit noisy when you do – but this is not meant to be a fast car.

The Ka is urban transport and few drivers will push it dynamically.

Those who do will find it’s a rewarding experience.

Body control and road holding are excellent and very predictable. It rides well for such a small car and the handling shames many costing twice the price.

The action of the dashboard-mounted gearstick is slick and well-engineered.

The newcomer is also roomy in the front.

The cutaway styling of the passenger side dash means there’s masses of legroom.

The cabin design is modern and well thought out; there’s a huge glovebox and a cubby hole next to the USB socket at the base of the central stack to hold an MP3 player.

Nearby are small nets that would take a pen or mobile phone, and there’s another in the roof for sunglasses.

Not surprisingly, it’s cramped in the back for any adult, and the headrests are geographically closer to being lumbar support cushions.

But it would be fine for short journeys or children. Boot space of 224 litres is comparable with rivals.

There’s precious little to dislike about the new Ka.

As a commuter runabout or second vehicle, the Ka sets a new standard. It looks great inside and out, drives well and will appeal to owners of all ages.