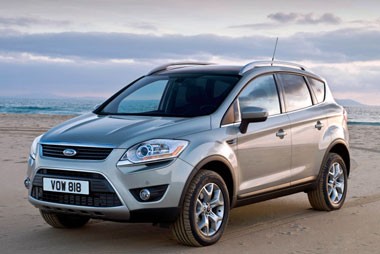 The dull fizzing sound was driving me a bit mad. Why couldn’t I get the iPod to work in the Kuga?

I was looking forward to controlling my plethora of songs via the excellent in-dash system that has proved such a success with the Bluetooth. But with the usual Apple cable it just wouldn’t work, even though it fitted in the socket fine.

A quick trawl around the internet informed me I needed a special pluggy thing, costing about £20, and the magic lead that arrived turned the Kuga into a big white iPod – brilliant.

The Kuga’s build quality is excellent, even if some of the interior design is on the gauche side.

One major problem with the interior is the central armrest bin, which is way too voluminous – it must be a foot deep and in its depths now lurk such horrors I dare not explore.

The Kuga is still performing admirably in all other respects. With the addition of a few thousand more miles, the engine is smoothing out and the fuel economy is creeping up, nearly smashing the 34mpg mark. Not great (Ford claims 44.1mpg on the combined cycle), but at least it’s going in the right direction.

One of the key strengths of the Kuga is something you don’t really notice until you drive another SUV.

Steering is direct, ride quality firm but not crashy and excellent body control means there is none of the lean you usually get with SUVs.

Only the brakes are a little snatchy, especially at slow speeds.

A useful bonus would be a Powershift automatic gearbox.

Although a good car, it has sold barely 200 in fleet this year, making it Ford’s least successful fleet model, probably because the four-wheel drive version is above the dreaded 160g/km mark and Ford’s incessant price rises have made it an expensive car now.